Electric vehicle company Tesla has now pushed new Model 3 Standard Range Plus orders to 6 months out, all the way to January 2022. 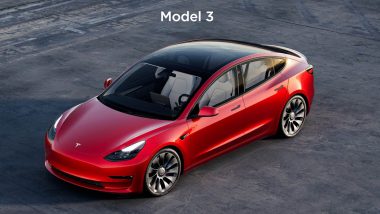 San Francisco: Electric vehicle company Tesla has now pushed new Model 3 Standard Range Plus orders to 6 months out, all the way to January 2022. According to Electrek, Tesla has updated its online configurator to push the delivery timeline for new Model 3 Standard Range Plus orders to January 2022, which was previously November 2021. Tesla Files To Produce 5 More Versions of the Model Y at Gigafactory Shanghai: Report.

However, Tesla's online configurator shows that the Model 3 Long Range still has a November 2021 delivery timeline, while the Model 3 Performance can be delivered as fast as four to seven weeks.

The company has had strong demand in the US, which could explain the extraordinarily long delivery timeline, the report said. But, Tesla also has had significant supply chain issues, especially related to the chip shortage, it added.

According to the report, it makes sense for the automaker to prioritise more expensive versions of the Model 3 when it comes to new orders. Tesla could be sending more chips and microchips to those vehicles.

However, according to a previous report, in the case of Model S and Model X, it's not only for new orders. Buyers who placed orders months ago recently saw their delivery timelines pushed to November-February.

(The above story first appeared on LatestLY on Aug 13, 2021 02:35 PM IST. For more news and updates on politics, world, sports, entertainment and lifestyle, log on to our website latestly.com).