The magnificent expanse of mighty Canadian Rocks stretching from British Columbia to Alberta is arguably the most poetic illustration of the second largest country on the planet. While it is one of the two pillars of North America, Canada is nonetheless strongly influenced by the culture of the Old Continent. 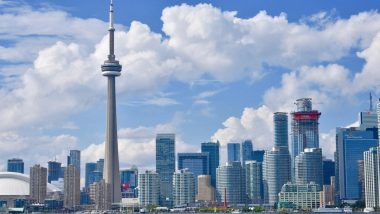 Snow-capped and majestic mountain peaks, lakes as far as the eye can see, virgin forests with a well-kept mystery, charming and anachronistic townships, glacial valleys carried by the northern night, wild expanses where a curious fauna evolves but also lively and multicultural metropolises, preserved colonial vestiges, a dual French and British influence, warm people and a tradition of hospitality dating back several centuries...Welcome to Canada!

The magnificent expanse of mighty Canadian Rocks stretching from British Columbia to Alberta is arguably the most poetic illustration of the second largest country on the planet. While it is one of the two pillars of North America, Canada is nonetheless strongly influenced by the culture of the Old Continent. The “French” regions of Canada have the particularity of being nestled in the heart of a luxuriant setting, displaying an exceptional historical heritage.

Are you tempted by Canada? Are you a national of a European Union country or of another country affected by the Canadian government's visa waiver program? Good news: you won't need to apply for a Canada visa but you will need an Electronic Travel Authorization (eTA). Rest assured: no bureaucracy, no administrative complications and no exorbitant amounts to pay.

The answer is almost immediate, the price does not exceed 7 Canadian dollars and the acceptance rate is (very) high.

eTA Canada: the result of a long tradition of hospitality

If you are planning to fly to Canada for your vacation or if you are simply transiting through a Canadian airport to reach another destination, you may need to apply for an Electronic Travel Authorization. Before discussing this document in more detail, there are two pieces of information that we would like to emphasize

The eTA Canada is not a visa.  It’s a travel document that authorizes you to travel to Canada for a maximum of 6 months (without the possibility of working or following an academic course of more than 6 months) to replace the classic Canadian tourist visa.

The Canada eTA, like visas, does not necessarily guarantee you entry into Canada. So yes, the overwhelming majority of travellers who hold an Electronic Travel Authorization for Canada will be able to get to caribou country without a problem, but nothing prevents an immigration officer from failing you for some reason or for another. This is why it is advisable to be as honest as possible when filling out the eTA Canada form.

As in every other country in the world, Canadian laws require residents and non-residents to have special documents when traveling to the country by land, sea or air.

New entry formalities in Canada from March 15, 2016. Obtaining an Electronic Travel Authorization (eTA) for all citizens from countries normally exempt from visa, excluding US citizens, who wish to return / transit through Canada, is now mandatory.

Applying for an eTA

Travelers must apply for an eTA before traveling to Canada by completing the online form at Canada.ca or eTA-Canada.com

To complete the online form, eligible applicants must have:

We strongly recommend that eligible travellers apply for an eTA when booking their flight and check the status of their application on the official Government of Canada website at Canada.ca. Valid for five years, the eTA allows multiple entries into Canadian territory, as long as your passport does not expire during this period.