As Vicky Kaushal's debut movie 'Masaan' clocked five years on the horizon of Indian cinema, the actor shared pictures from the film to mark the occasion. 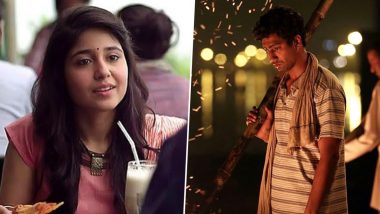 As Vicky Kaushal's debut movie 'Masaan' clocked five years on the horizon of Indian cinema, the actor shared pictures from the film to mark the occasion.nHe captioned the Instagram post with five balloons that connect with an important sequence from the film featuring him and Shweta Tripathi. One picture from the movie shows the actor working at a cremation ghat where he makes a living by burning funeral purse. 10 Years of Tere Bin Laden: Manoj Bajpayee Congratulates Abhishek Sharma As His Satirical Comedy Turns a Decade Old

The other pictures show the cast and crew of the film, including Richa Chadda, Sanjay Misra, Shweta Tripathi, Pankaj Tripathi and director Neeraj Ghaywan. Fans and celebrity followers, including Ayushmann Khurrana, flooded the post with more than 64 thousand likes."I love this one," commented Bhumi Pednekar with a red heart emoji. Ajay Devgn Celebrates 22 Years Of Pyaar To Hona Hi Tha With Kajol In ‘Reel and Real’ Life! (View Post)

This day. 5 years back. One of the most important things for an actor is that first Friday, when the world sees them on the BIG screen for the first time. And I really couldn’t have asked for a better one. The team, the story, the characters, the place, the music.. all of it so, soooo special and close to our hearts. We were in Benaras for the premiere. The city where where it all began 🙏🏼✨ Khud ka hair and make-up karke, muskuraatey hoe aur tummy mein bahut saari 🦋 ko lekar pahuch gaye thee hum apni film sabke saath dekhne. We felt all kinds of 🎈then and still do. Thank you for the love, the poetry and the baarish. Thank you for making us your Devi, Deepak aur Shaalu. #Masaan