Ajay Devgn shared a montage of some cute moments from the film as he got nostalgic about their journey. 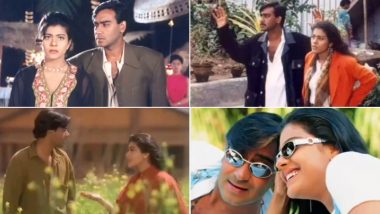 Ajay Devgn and Kajol are one of the most loved celebrity couples in Bollywood. Their love story blossomed after working together on Pyar Toh Hona Hi Tha. It's amazing how the duo became close during this film after working together on several other projects. On July 15, 2020, the film now completes 22 years and celebrating the same and also the start of his romantic journey with Kajol, Ajay Devgn took to Twitter to share the film's moments in an amazing video. Ajay Devgn shared a montage of some cute moments from the film as he got nostalgic about his journey. Confirmed! Ajay Devgn to Produce a Film on Galwan Valley Clash (Read Details).

Ajay Devgn took to Twitter and wrote, "22 years in real and reel. Pyaar To Hona Hi Tha." The film directed by Anees Bazmee was a remake of the 1995 Hollywood movie French Kiss starring Meg Ryan and Kevin Kline. This post from Ajay received a lot of love from fans. A user commenting on his post wrote, "One of the best movie featuring both of you." Another user called it, "Best Romantic movie." Well, we have to say Ajay and Kajol's chemistry in this film was beyond adorable and we'd surely love to see the duo come together for a rom-com once again soon. Bhuj: The Pride of India on Disney +Hotstar: Ajay Devgn and Sanjay Dutt Look Intense In The Indo-Pak War Movie Posters.

Ajay Devgn and Kajol were last seen together on-screen in the period drama Tanhaji: The Unsung Warrior. While Ajay played the role of Maratha warrior Tanhaji Malusare, Kajol portrayed the role of his wife Savirtribai Malusare.

(The above story first appeared on LatestLY on Jul 15, 2020 02:46 PM IST. For more news and updates on politics, world, sports, entertainment and lifestyle, log on to our website latestly.com).