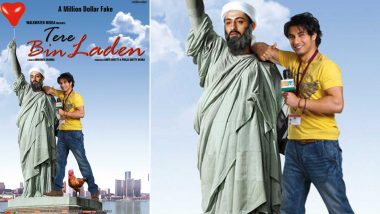 Abhishek Sharmas debut directorial feature "Tere Bin Laden" was released 10 years ago on this day, and veteran actor Manoj Bajpayee has congratulated the filmmaker on the occasion. Bajpayee stars in Sharma's next release, "Suraj Pe Mangal Bhari". Sunny Leone Celebrates 3 Years Of Becoming a Mother to Nisha Kaur Weber, Says ‘You Are the Light In Our Lives’ (View Post)

Said Sharma: "Today, after 10 years, the industry has evolved and I have also grown up as a director. Now I have actors like John Abraham, Manoj Bajpayee, and Diljit Dosanjh trusting my vision with out-of-the box ideas. This is a great feeling and I think somewhere the success of ‘Tere Bin Laden' has played a big role in making me a trustworthy filmmaker."

(The above story first appeared on LatestLY on Jul 16, 2020 04:15 PM IST. For more news and updates on politics, world, sports, entertainment and lifestyle, log on to our website latestly.com).