Ajay Devgn's Bhuj: The Pride of India May Be Next in Line to Strike a Deal for Direct OTT Release 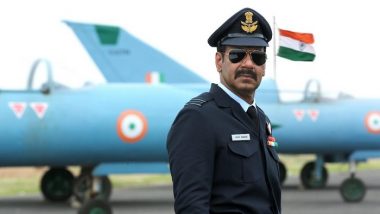 OTT releases are the next big thing in the entertainment industry and while cinema will continue to co-exist, web releases and their popularity will continue to boom in the market. Especially in times of coronavirus lockdown when theatres are shut and productions are halted, producers are thinking of ways to stay afloat and even considering the option of direct to web release. While Ayushmann Khurrana and Amitabh Bachchan's Gulabo Sitabo was the first movie to take the big plunge and strike a deal with Amazon Prime, Vidya Balan's Shakuntala Devi was quick to follow their suit and now we hear Ajay Devgn's Bhuj: The Pride of India may also join the list. Ajay Devgn’s Bhuj: The Pride Of India to Release On Vijay Diwas 2020?

As per a report in Pinkvilla, the makers of Ajay's war drama are thinking about striking a deal with Disney+ Hotstar considering the option of having a theatrical release continues to remain uncertain. "Though there are a few shooting days left for the film, the makers are very well aware of the post unlock situation wherein theatre-goers might be apprehensive to go in crowded places. Keeping all this in mind, the producers are in talks with Hotstar to get a direct digital release, given that further delay will only add to the production cost. The makers are trying to crack a good deal with the platform. Talks are currently on a primary stage," said a source close to the development in his conversation with the portal. Ajay Devgn To Shoot His Introduction And Climax Scene During The Mandvi Schedule Of Bhuj: The Pride Of India.

Producer Bhushan Kumar had earlier revealed that post lockdown, the movies with few days of shooting left will resume their working first. Bhuj: The Pride of India stars Sonakshi Sinha, Nora Fatehi, Sanjay Dutt and it revolves around IAF Squadron Leader Vijay Karnik, who was in charge of the Bhuj airport during Indo-Pak war of 1972 and how he reconstructed IAF airbase with the help of 300 local women. The movie was earlier scheduled to hit the screens on August 14, 2020

(The above story first appeared on LatestLY on Jun 01, 2020 09:55 PM IST. For more news and updates on politics, world, sports, entertainment and lifestyle, log on to our website latestly.com).