Akshay Kumar In Laxmmi Bomb Or Ashutosh Rana In Sangharsh: Who Did This Scene Better? Vote Now

Akshay Kumar's Laxmmi Bomb takes a leaf out of Akshay's other film Sangharsh that released in 1999. In the other film, Ashutosh Rana did the same scene. Which one do you like? 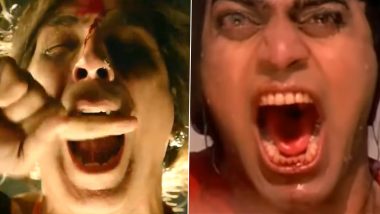 Laxmmi Bomb is yet another film that will hit Disney+ Hotstar, coming this Diwali. Today the trailer of Akshay Kumar and Kiara Advani starrer was released. While we are quite impressed by the trailer, there's a scene that took immediately to Akshay's other film Sangharsh that released in 1999. Ashutosh Rana had played a psychopath killer who wanted to perform a ceremony with a kid as the sacrifice. Rana cross-dresses as a woman and makes a shrill noise to scare Preity Zinta. He didn't just scare the actress but us too. That's one scene we will never forget. Now it's your time to tell us which one sent a chill down your spine! Laxmmi Bomb Trailer: Akshay Kumar’s Horror-Comedy Promises a Big ‘Dhamaka’ This Diwali (Watch Video)

Akshay repeats the same one in the Laxmmi Bomb trailer. While it was striking, it was far from being scary, according to us. Maybe because the film is a horror-comedy while Sangharsh was a realistic film.

Check both the scenes right here...

Scroll down to 3:02 minutes to realise why we will never be able to forget this scene in Sangharsh.

Vote here and tell us...

Who Did This Scene Better?

As the COVID-19 pandemic shuts down cinema halls, producers decided to switch to OTT for streaming of their movies. This is was supposed to be a medium of film exhibition far away in the future but the pandemic fast-forwarded it to 2020. Although nothing can beat the experience of a theatre, we are glad we had enough entertainment in the last couple of days thanks to these digital platforms. Laxmmi Bomb will be streaming from November 9.

(The above story first appeared on LatestLY on Oct 09, 2020 03:20 PM IST. For more news and updates on politics, world, sports, entertainment and lifestyle, log on to our website latestly.com).