The wait is finally over as Akshay Kumar's upcoming OTT release Laxmmi Bomb's trailer is finally out! The film stars Kiara Advani opposite the actor. This flick happens to be a remake of Tamil hit, Kanchana. Read on. 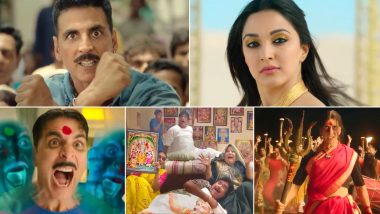 The wait is finally over as Akshay Kumar's upcoming OTT release Laxmmi Bomb's official trailer is finally out! The film stars Kiara Advani opposite the actor. This flick happens to be a remake of Tamil hit, Kanchana and so expectations were a little high. And boy, Akki has delivered one of his best performances till now. Laxmmi Bomb is all set to release on Disney+Hotstar on November 9 that is Diwali, and after watching the trailer we bet you'll not be able to keep calm. This horror-comedy will be the biggest hit of 2020. Laxmmi Bomb Trailer to Drop on THIS Date; Akshay Kumar Makes the Big Announcement.

The trailer starts with Akshay Kumar where his disbelief in ghosts is quite visible. He utters this dialogue, "Jis din mere samne bhoot aya na, maa kasam chudiya pehen lunga." Well, this line actually becomes the premise of the film wherein later we see Akki's possessed by a spirit of a transgender. From there on starts the fun and drama, as we see the Khiladi Kumar acing the female look. Kiara Advani too looks promising in the clip. Laxmmi Bomb: Akshay Kumar Starrer To Have A Theatrical Release In Australia, New Zealand And UAE On November 9, 2020!

Check Out The Trailer Of Laxmmi Bomb Below:

Helmed by Raghava Lawrence, the movie was earlier going to release in theatres, but considering the COVID-19 situation, it went the digital way. Also, with the trailer already out, now we would definitely see the stars promoting their film. So, what's your take? Did you like the trailer? Tell us in the comment section below. Stay tuned!

(The above story first appeared on LatestLY on Oct 09, 2020 01:12 PM IST. For more news and updates on politics, world, sports, entertainment and lifestyle, log on to our website latestly.com).