Antim: The Final Truth released on the theatres on November 26. Antim is adapted from a Marathi film of 2018 titled Mulshi Pattern. The action-thriller stars Salman Khan, Aayush Sharma and Mahima Makwana. Here's what critics have to say about the film. Read on! 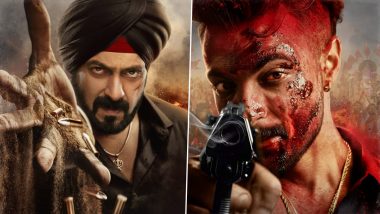 Salman Khan and Aayush Sharma-starrer Antim: The Final Truth was released on the theatres on November 26. Helmed by Mahesh Manjrekar, the movie revolves around the clash between a Sikh police officer (Salman) and a mafia (Aayush), and it unveils the tough conditions and situations faced by farmers that forces them towards committing crime. And, the movie garnered mixed reactions from the critics. Antim The Final Truth Review: 5 Fixes That Could Have Saved Salman Khan-Aayush Sharma's Gangster Drama (SPOILER ALERT).

Apart from the leads, the flick also stars Mahima Makwana as the female lead. The action-thriller is adapted from a Marathi film of 2018 titled Mulshi Pattern. As per reviews, critics are more impressed by Aayush rather than Salman. The power-packed performance that Aayush has given is something that won all the critics' hearts.Antim – The Final Truth First Reactions Out! Salman Khan, Aayush Sharma’s Actioner Is a Winner As Per Fans!

Times of India: "With his very first scene, director Mahesh Manjrekar sets the stage for a rebellious gangster story when Rahulya rushes to save his poor father Satya (Sachin Khedekar), who is being beaten up by an unscrupulous land Mafioso. The same man has also usurped their ancestral farm land. What follows is Rahul’s quick transformation from a jobless youngster to a dreaded gangster, as Pune’s most influential goon Nanya Bhai (Upendra Limaye) takes him under his wing. But there is one problem. Inspector Rajveer Singh (Salman Khan), who knows how and when to use brains and brawn to clean up the city of every malice - from rowdy rapists and power-hungry politicians to gun-wielding gundas."

Firstpost: "Ayush Sharma plays Rahul, a do no-gooder who watches his father struggle with small jobs. When they move to Pune, where they work as coolies in the market yard, Rahul suddenly develops an attitude. Violence gushes out of him. From being exploited and oppressed, Rahul becomes the oppressor. He takes to a life of crime with ease. Even his parents’ disdain doesn’t rattle him or prevent him from behaving despicably in their presence. Rahul is a dislikable man. His attempts at wooing the tea stall girl Manda (Mahima Makwana) are also loaded with arrogance and attitude. He respects no one, least of all women. In fact the few women characters in Antim are given neither agency nor any standing. They cower behind their husbands and curse their fate or sing and dance for their supper."

NDTV: "The amalgam of multiple concerns - the plight of farmers, the greed of industrialists, the futility of crime and the policing of urban areas - is undeniably significant. It contributes to separating the film just a touch from run-of-the-mill cops-and-gangsters flicks. However, the approach that Antim takes is not only riddled with cliches, it is also, in the ultimate analysis, abjectly anodyne. The line between the meaningful and the massy is indeed precariously thin in Antim. The film barely touches upon the former and leans too heavily towards the latter. That is a departure from Mulshi Pattern, the 2018 Marathi film from which it is loosely adapted."

Hindustan Times: "Set on the premise of age-old ordeal of farmers losing their land to mafias, Antim shows its repercussions when Rahul (Aayush Sharma), a jobless son of a farmer turns into one of the most dreaded gangsters who joins hands with land mafias of Pune to fight injustice after his father is ripped off his land. Will he manage to win back all that he lost in this journey or will he face the wrath of his own wrong doings? This narrative that keeps you on the edge for most of the time."

The Indian Express: "Those twin objects are fulfilled with a great deal of zeal and enthusiasm, because from the start, not a moment goes by without the school dropout Rahul/Rahulya (Aayush Sharma) glaring and flaring up at those who have grabbed his arrow-straight father’s (Sachin Khedekar) ‘zameen’. The moments that are left over are filled up by clean-and-mean police officer Sardar Rajveer Singh (Salman Khan), all togged out in a turban, having replaced his beloved azure bracelet with a ‘kadaa’, and doing what he does best– baring his ‘faulaadi’ chest, slinging out one-liners, and pulverizing the baddies."

Sreeju Sudhakaran from LatestLY has also watched the film and said, "The protagonist of Antim is Rahuliya (Aayush Sharma), let not the expanded character arc of Salman Khan's righteous Sikh cop Rajveer Singh trick you into thinking otherwise. Rahuliya's father Datta Pehelwan (Sachin Khedekar) was once a farmer in a village called Mulshi though he later had to sell his lands to a rich man, where he then worked as a security man. Rahuliya is irked by this fact and he verbally takes out his frustration on his father who maintains a stoic silence. When Datta loses his job, they migrate to Pune where Rahuliya and his friend Ganya are drawn into the world of crime, which he sees as a social equalizer. Rahuliya also falls for the feisty tea-seller Manda (Mahima Makwana, sparkling in her brief role), though her father doesn't approve the match."

However, with the above reviews it can be said that the film has got mixed reactions from the critics. Considering the cast and the story, the audience had quite some expectations from the film. The movie is currently running in all the theatres nearby you!

(The above story first appeared on LatestLY on Nov 26, 2021 06:12 PM IST. For more news and updates on politics, world, sports, entertainment and lifestyle, log on to our website latestly.com).