Antim: The Final Truth is a gangster drama directed by Mahesh Manjrekar and is a remake of the Marathi film, Mulshi Pattern. The movie stars Salman Khan and Aayush Sharma in the lead, while Mahima Makwana, Sachin Khedekar, Jisshu Sengupta, Nikitin Dheer, Upendra Limaye, Sayaji Shinde and Manjrekar himself form the supporting cast. Varun Dhawan has a special appearance. 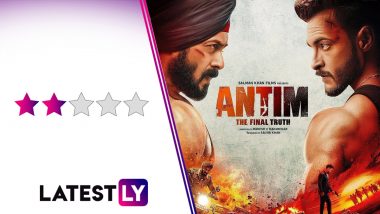 Antim Movie Review: The maximum praise I can say about Salman Khan's new release, Antim - The Final Truth, is that it is better than his last release, Radhe: Your Most Wanted Bhai. The best thing I can say about Salman Khan is that this is a comparatively restrained performance from the superstar and that he can still rock those abs and pecs even in his mid 50s. The best feedback that I can give to Mahesh Manjrekar the director is that he has left me nostalgic about his first movie. The best praise I can shower on Aayush Sharma is that even if his performance has rough edges, the man oozes plenty of confidence into his act of an ambitious, grash gangster wanting to climb the social ladders. Antim – The Final Truth First Reactions Out! Salman Khan, Aayush Sharma’s Actioner Is a Winner As Per Fans!

Now that I have said my nice things about Antim, let's get to business. Antim - The Final Truth is the official remake of Marathi film Mulshi Pattern, which though wasn't directed by Manjrekar, had him in a supporting role. For the Hindi remake, Manjrekar dons both the caps of the director and an actor, playing the role of the heroine's drunkard father, and basically repeating what he did in the first Dabangg movie.

The protagonist of Antim is Rahuliya (Aayush Sharma), let not the expanded character arc of Salman Khan's righteous Sikh cop Rajveer Singh trick you into thinking otherwise. Rahuliya's father Datta Pehelwan (Sachin Khedekar) was once a farmer in a village called Mulshi though he later had to sell his lands to a rich man, where he then worked as a security man. Rahuliya is irked by this fact and he verbally takes out his frustration on his father who maintains a stoic silence.

When Datta loses his job, they migrate to Pune where Rahuliya and his friend Ganya are drawn into the world of crime, which he sees as a social equalizer. Rahuliya also falls for the feisty tea-seller Manda (Mahima Makwana, sparkling in her brief role), though her father doesn't approve the match.

So what does Rajveer Singh? For one, he pouts a lot about his Sikh identity, of him being Hind ka kesari, and then empathises with the farmers' plight. I could snigger at the irony there, but why bother? His intro scene has him emphasise on him being a Sardar in a Maharashtrian police station is not so out of place, though no one asked about it. We know the reason why his character is a Sikh - even though it is a very localised movie, Antim has to perform in those Northern terrains na.

Rajveer, when not shooting down criminals with a swag that only Salman can pull off, never leaves the opportunity to have the last word in a verbal spat. He also encourages the gangsters to kill each other, pitting Rahuliya against his two rivals, played by Jisshu Sengupta and Nikitin Dheer. Basically, if Sanjay Dutt from Zilla Ghaziabad was more fit and didn't fly around, he would be Rajveer! Antim: Salman Khan Wont Be Promoting the Aayush Sharma Starrer Film, Here’s Why.

Interestingly, the great Upendra Limaye, who portrayed the same role in the Marathi film, plays a criminal this time around who introduces Rahuliya to the world of crime. Unlike the rumours, Salman's role isn't a cameo, but more of a supporting role which is forced to make an impression that it is a parallel lead. The grounded aspect of Antim is blown apart when the director has to remind the audience that this is a Salman movie, and there is no compromise on the swagger. There are a couple of mass moments I enjoyed, like how Rajveer handles the situation when his subordinate's son is in awe of a gangster and disrespects the father. The comical BG score in that scene could have been avoided though, as if Antim yearned to get into Dabangg territory. Radhe Movie Review: Salman Khan and Disha Patani’s Tone-Deaf Remake of The Outlaws Is Terribly Dated!

Returning to the man around whom the whole story revolves around, Aayush's Rahuliya is an anti-hero, who fails to realise that he is doing the very same thing what the rich and the powerful did to his father -  forcibly usurping farmers' lands. This could have been a very fascinating arc for the character. I have not seen Mulshi Pattern - my mistake - so I am in the unclear about how the Marathi film handles the character progression. Seeing the praise that the movie got, I believe that it must have done a nice job there.

But Antim totally disappointed me in this aspect. The farmers' problems become more of a side-note in the swaggy duel between Rahul and Rajveer. This includes the internal shirtless fight scene between the duo, and the climactic fight that tags them together against other villains.

It also doesn't help that you get a sense of deja vu feeling when you analyse Rahuliya's predictable life-story, with regards to Manjrekar's career-making film, Vaastav. I can't even say Antim is an updated take, since the making is quite old-style with dollops of needless melodrama, especially in the second half, that's long and quite dragging. The climax is slightly inspired by Mohanlal's Malayalam film Chenkol, it seems, or for the matter, even the fact that Rahul's family continues to remain estranged with him till the end, once he turns criminal.

PS: Along with Satyameva Jayate 2, Antim becomes the second Hindi film of the week, that tries to address the issues of the farmers in the name of entertainment. The irony isn't lost on those who remember the mainstream Bollywood's stoic silence during the year-long, still ongoing farmers' protest. Satyameva Jayate 2 Movie Review: Three John Abraham's Get Crammed Into This Terrible Migraine-Packed Masala Movie!

- Salman and Aayush Brighten Proceedings with Their Screen Presence

The problem with Antim - The Final Truth is that it suffers from a serious identity crisis. It wants to be a grounded gangster drama, and yet it also aims to be a wannabe Dabangg clone. In trying to be both, what we get is a tiring, bloated and predictable gangster drama with a few mass moments.

(The above story first appeared on LatestLY on Nov 26, 2021 02:07 PM IST. For more news and updates on politics, world, sports, entertainment and lifestyle, log on to our website latestly.com).