Before Antim, All The Movies Where Salman Khan Took a Backseat For His Family Members

Salman Khan is a family man. His love for his family members is nothing short of a exemplary. He has often done things for his brothers and now he did it for his brother-in-law Aayush Sharma as well with Antim without overshadowing any of them. Here're some more examples of the same 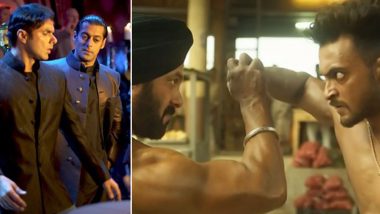 Salman Khan is a family man. Yes he may not have wife or kids of his own, but his family is his biggest priority. Even today, he lives with his parents at Galaxy Apartment despite having several real estate properties. This attribute of his is not restricted to his immediate family but extended ones as well. Salman is a superstar and he is aware what his name on a film means for its box office fate. He has never hesitated to share his stardom with his family members and even for his friends. In fact, there has been times when he acted in movies of people related to him and yet didn't try to hijack it as his own. He happily takes a backseat. Antim The Final Truth Review: 5 Fixes That Could Have Saved Salman Khan-Aayush Sharma’s Gangster Drama (SPOILER ALERT)

In Antim, Aayush Sharma plays a hoodlum who clashes with the honest sardar cop Salman. The superstar lets his brother-in-law shoulder the film even when it was promoted as Salman's work. And guess what Antim isn't the only one!

An onscreen adaptation of Chetan Bhagat's 'A Night @ The Call Centre', Hello! had Sohail Khan in a primary role. Salman was more of a sutradhar (narrator) in the film which also had Katrina Kaif in a cameo. Antim Movie Review: Salman Khan’s Attempt To Take a Backseat for Aayush Sharma Proves Futile in This Tiring Vaastav Revisit (LatestLY Exclusive)

A story about the great soldiers of India's military forces. Salman Khan played a sardar who was with the armed forces. The movie had several stars including Sunny Deol and Bobby Deol. But it mostly revolved around two boys Sohail Khan and Vatsal Seth.

In Main Aur Mrs Khanna, although the Khanna was Salman Khan, his character was never written in a way that overshadows Sohail's as the latter was the conflict in the tale and hence more important.

(The above story first appeared on LatestLY on Nov 27, 2021 05:35 PM IST. For more news and updates on politics, world, sports, entertainment and lifestyle, log on to our website latestly.com).