Kriti Sanon who wrapped the shoot for her upcoming film 'Bhediya' in Ziro, Arunachal Pradesh right before the second lockdown was imposed, recently shared an adorable BTS image with a local child from the city. The film is slated to release in cinemas on April 14, 2022. 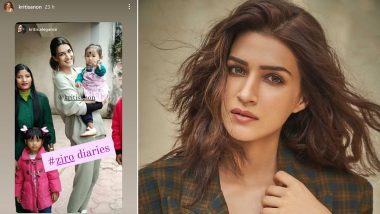 Bollywood actor Kriti Sanon who wrapped the shoot for her upcoming film 'Bhediya' in Ziro, Arunachal Pradesh right before the second lockdown was imposed, recently shared an adorable BTS image with a local child from the city. The 'Heropanti' actor took to her Instagram Story and posted the picture as she spent some happy moments with the locals at the beautiful location.The photo sees Sanon in a plain mint green tracksuit holding the cute girl while exuding happiness as the duo smilingly glare into the lens. The photo also read, "#ziro diaries." Bhediya: It's a Wrap for Kriti Sanon and Varun Dhawan's Starrer in Arunachal Pradesh (View Pics).

For the unversed, this same child, seen in a blue sweater and pink frock, had earlier gone viral when Kriti had shared a video of the girl getting ready to eat a piece of cake which Varun Dhawan gave to the person behind her without realising the little girl was waiting for her turn to eat it. The film, which went on floors earlier in March in Arunachal Pradesh, will bring together the dynamic duo of producer Dinesh Vijan and director Amar Kaushik, who also helmed the 2018 blockbuster movie 'Stree'. Bhediya: Kriti Sanon Posts a Clip With Co-Star Varun Dhawan As They Wrap Their Film's Shoot in Arunachal Pradesh. 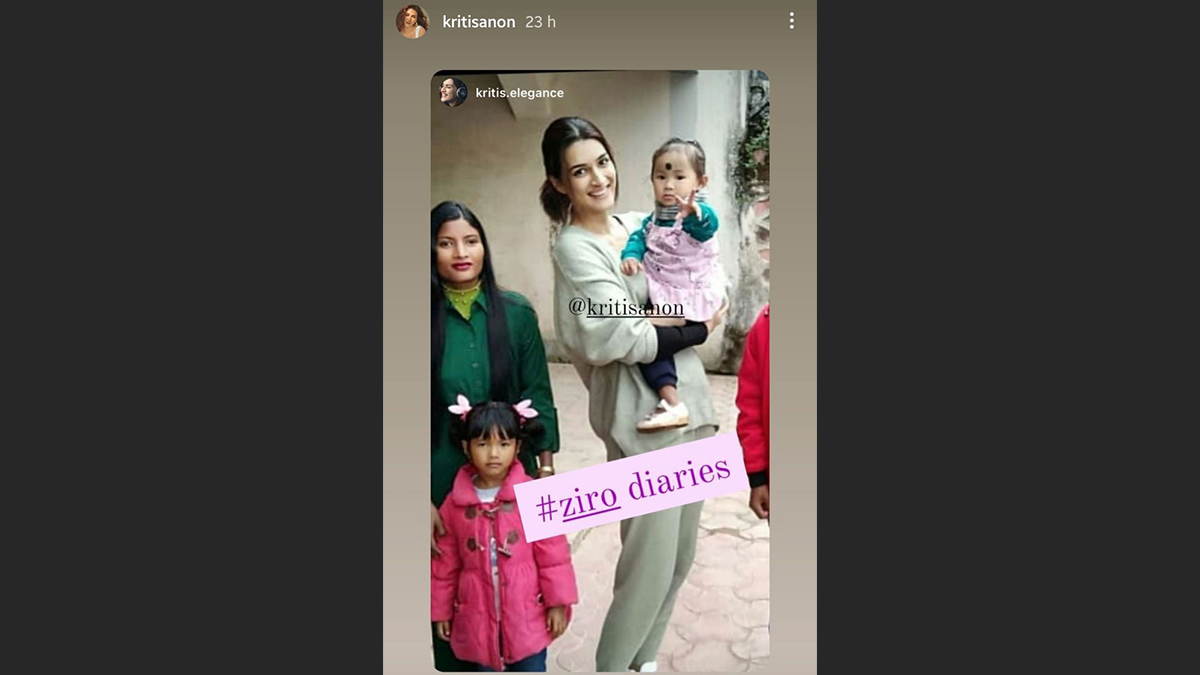 Starring Kriti Sanon, Varun Dhawan, Abhishek Banerjee, and Deepak Dobriyal, the story is written by National Award Winner, Niren Bhatt who also wrote intriguing scripts for 'Bala', 'Made In China', 'Wrong Side Raju'. The film is slated to release in cinemas on April 14, 2022. The 30-year-old actor has an envious line-up of films including the pan-India film, 'Adipurush' that will see her in the role of goddess Sita opposite South Indian superstar Prabhas. She has also got 'Bachchan Pandey' opposite Akshay Kumar, 'Hum Do Hamaare Do' and 'Mimi' as the solo lead. Kriti will also be seen in 'Ganapath' with Tiger Shroff and she has got an unannounced project in her kitty.