Abhishek Bachchan and Chitrangada Singh's film Bob Biswas released on ZEE5 today (December 3). However, sadly the thriller is the latest victim of piracy, as it has been leaked online for free watch and download. 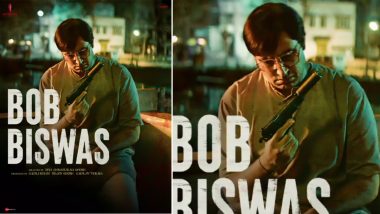 Diya Annapurna Ghosh's directorial Bob Biswas released on ZEE5 today (December 3). Since then, the Bollywood film has been a hot topic of discussion on Twitter. Starring Abhishek Bachchan and Chitrangada Singh in lead roles, this is a spin-off on a fictional character named Bob Biswas from Vidya Balan's film Kahaani (2012). Even the early reviews of the movie are out and critics aren't pleased. However, unfortunately, within a few hours of its release on the OTT platform, Bob Biswas has got leaked online. The film is now available for streaming on torrent sites. There's an HD print available of the show to watch online. Bob Biswas Trailer: Abhishek Bachchan's Turn From Innocuous Man to a Killer Looks Promising in This ZEE5 Film (Watch Video).

Bob Biswas full movie in HD has been leaked on several torrent sites like Filmywap, Onlinemoviewatches, 123movies, 123movierulz, Filmyzilla, and other pirated versions of the series in HD (300MB free download in 1080p, 720p, HD online) are available for the audience to watch.

Meanwhile, the story of Bob Biswas explores the life of a hitman-for-hire, who finds it difficult to recall his criminal past and experiences moral dilemma after coming out of the coma. The movie is backed by Shah Rukh Khan's Red Chillies Entertainment. Stay tuned!

(The above story first appeared on LatestLY on Dec 03, 2021 04:22 PM IST. For more news and updates on politics, world, sports, entertainment and lifestyle, log on to our website latestly.com).