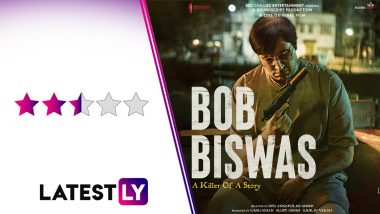 Bob Biswas Movie Review: Like many other fans of Sujoy Ghosh's Kahaani and its assorted characters, I was annoyed that the makers of Bob Biswas was bringing back the fan-favourite assassin, and then replacing Saswata Chatterjee with Abhishek Bachchan. But when I started watching Bob Biswas, Bollywood's rare attempt to make a spinoff, I was taken aback at first. There were some very surprising character and plot developments that made me wonder if the re-casting and exploring a character (and thereby losing his mystique) made sense. Towards the end, though, I was like 'Oh my John Wick, what the fresh hell is this?'! Bob Biswas Song Tu Toh Gaya Re: Abhishek Bachchan Is a Puzzled Assassin in This Intriguing Track.

Bob Biswas is written by Sujoy Ghosh, though it is directed by his daughter Diya Annapurna Ghosh. Going by the narrative that is presented here, it looks like Bob somehow managed to escape that fatal accident in Kahaani (which doesn't make sense if you revisit that scene), and has been in coma for about eight years. When he wakes up, Bob is somehow taller and younger, and is played by Abhishek Bachchan. He has no memory of his past life, and is surprised to learn that he has a wife Mary (Chitrangada Singh), a young son Benny (Ronith Arora) and a college-going step-daughter Minnie (Samara Tijori).

Bob is also being tailed by two shady IB officers (Bhanu Uday, Vishwanath Chatterjee), who is more interested in knowing if he remembers his other life - where he was a dangerous assassin moonlighting as an LIC salesman. There is also a separate track going on about a drug called Blue on which Minnie gets addicted, and later even Bob gets embroiled into.

Have to say that there is a plethora of potentially great ideas and potentially great characters scattered around the screenplay of Bob Biswas. The key word here being 'potentially'. The whole amnesiac protagonist trope, even if beaten and dusted, carries a sense of mystery, as we discover the pieces of puzzle along with the confunded protagonist.

I was more interested about which track Bob Biswas would be taking. Would it be about the protagonist trying to rediscover the past life and figure out why certain things aren't making sense a la Prithviraj Sukumaran in the Malayalam film Mumbai Police? Or will it be Bob slowly realising that his present life is a facade set up to not remember his past life a la Arjun Rampal in Yakeen (which was a remake of a Hollywood thriller Shattered), which could explain the change in casting? Maybe, in my head, I was making a far more twisty premise than what I got here.

The movie also hints at a secret world of assassins a la John Wick, with Kolkata having its own 'Continental' in the form of an old medicine shop that is a front for illegal weapons cache that is considered neutral by all. The drug angle, while the film's weakest part, adds complications to Bob and Minnie's already prickly equation. There are a couple of interesting bursts of black humour, like Biswas' first kill in this movie that springs out of his instinct.

So Bob Biswas has a set of interesting ideas and moments, but what it lacks is the cohesion to turn them all into a smart, inventive thriller a la Kahaani. Bob Biswas is unsure of the identity that it wants to adopt - a black comedy or a dark thriller. I wish the film could have delved into the sinisterness of the character that it tries to tease, like what Bob does to the rabbit of his son's classroom bully. Or the dark secret that ties him to Mary's past. Instead, the movie attempts to pull a Cruella on him, trying to shove him into a sympathetic light and giving him a crisis of conscience. It would have worked if the writing was better.

Bob Biswas also leaves us with plenty of questions. Why do the officers need an amnesiac killer for their agenda? Why are they after the drug circle, a mission that has been happening for years before Bob lost his memory, when their intentions aren't that innocent? How come Bob's cash stash doesn't have any demonetised money considering he saved it before he went into his eight-year coma? How did Kolkata, that become a unique character in the first film, lose its personality here? What the heck was that whole track involving Amar Upadhyay's lecherous boss, which don't matter much to the plot? Why do Bollywood films hate teenagers so much that they have to make them so irritating? Why if Bob Biswas has John Wick-like shooting skills (he lands the perfect headshots) from early on, did he never use those on Vidya Bagchi before getting run over? Why, when it comes to crucial main characters, do villains tend to monologue before killing, while instant headshots are reserved for other characters? What's the deal with that lazy twist in the end that connects Bob Biswas to the events of Kahaani? These ain't the kind of questions that leave you curious about the puzzle but actually irk you about not giving you clear answers. Bob Biswas: Chitrangda Singh Talks About Her Role in the Upcoming Crime Thriller Movie.

Credit where due though, Diya Annapurna Ghosh's direction is very decent and would have been far more effective if the writing was stronger. As for Abhishek Bachchan, the actor is convincing as the befuddled amnesiac trying to figure out what kind of person he was in the past life. But he does little to make us not miss the OG Bengali star. Chitrangda Singh is okay as the sultry wife, her character isn't written well. Among the supporting roster, two roles make some impact are that of Pavbithra Rabha as Dhonu, the roadside stall-owner who is a deadly assassin (but unfortunately exits the film just when he got all the more interesting) and the veteran Paran Bandopadhyay as the 'Winston' in Bob's world.

- Some Nice Moments of Black Humour and Surprise Kills

- A Nice Setup (that Doesn't Exactly Evolve Into Better Movie)

- Not as Smart as Its Predecessor

Bob Biswas has some smart ideas that don't lend enough to be a smart movie about a forgetful killer in a corrupt world of even more dangerous men. At best it reminds us of a lesson - when a character turns out to be a scene-stealer in small doses in a movie, don't Naam Shabana it and lose the whole enigma in the process. Bob Biswas is streaming on Zee5.

(The above story first appeared on LatestLY on Dec 03, 2021 10:09 AM IST. For more news and updates on politics, world, sports, entertainment and lifestyle, log on to our website latestly.com).