Chup: Revenge of the Artist is directed by R Balki. It is produced by Hope Filmmakers and Jayantilal Gada’s Pen Studios. Check out review roundup of the flick here! 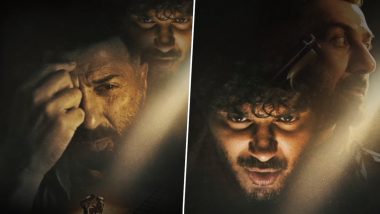 Chup: Revenge of the Artist which is officially set to release at the theatres on September 23 had its fan screenings in ten cities across India a day before and looks like audiences are impressed. As early reviews of the R Balki film are out and they seem pretty positive. Starring Dulquer Salmaan, Sunny Deol, Shreya Dhanwanthary and Pooja Bhatt in main roles, the movie depicts the pain of an artist who suffers from wrong criticism. Just in case, you are planning to watch Chup in theatres near you, have a look at the review roundup below. Chup Trailer: Sunny Deol and Dulquer Salmaan Star in R Balki's Thriller About a Serial Killer Who Targets Movie Critics (Watch Video).

News18: "Stripped of its pretensions, Chup works in parts thanks to the premise and some taut moments of suspense. The rich texture, wonderful use of real locations, and flavourful camerawork help the plot appear more mythic than it actually is."

TOI: "Dulquer Salmaan gives in his best to play a loner and a lover. One can see the actor’s struggle in juggling his complex character and he does a satisfactory job of it. Shreya Dhanwanthary (of Scam 1992 fame) is endearing as the woman in love but her role as a journalist doesn't give her much scope to perform." Chup Song Gaya Gaya Gaya: Dulquer Salmaan and Shreya Dhanwanthary Romance in Rain in This Love Ballad (Watch Video).

Koimoi: "Chup comes from a team that immensely loves cinema and everything it represents, you must surrender to an idea that is untouched and brilliant. With some minor flaws, you should not miss watching his ode which is more than just a movie about a killer on loose."

Gulf News: "When it comes to setting a scene and building a tense tone of a film, nobody does it better than director R Balki. The cloudy skies and the murky weather is a fair match to the dark, disturbed, and warped mind at work. The build-up is real and raw."

So, after reading positive reviews above, are you going to watch Chup at the cinema hall? Tell us in the comment section below.

(The above story first appeared on LatestLY on Sep 22, 2022 05:11 PM IST. For more news and updates on politics, world, sports, entertainment and lifestyle, log on to our website latestly.com).