Class of 83 Movie Review: A Pensive Bobby Deol and the Talented Newcomers Fight a Hard Battle Against Hazy Writing and Rushed Editing

Class of 83 is a Netflix Original film directed by Atul Sabharwal and co-produced by Shah Rukh Khan's Red Chillies Entertainment. Bobby Deol makes his digital debut with the film, while other main leads are played by newcomers, Bhupendra Jadawat, Sameer Paranjape, Ninad Mahajani, Prithvik Pratap, and Hitesh Bhojraj. Class of 83 is streaming on Netflix. 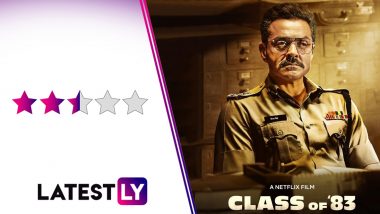 Class of 83 Movie Review: Class of 83 is the latest to come out of the collaboration between Shah Rukh Khan's Red Chillies Entertainment and Netflix. Their past two collaborations, like some of King Khan's recent films, haven't received the kind of audience reception that was expected with the wave of expectations they came in. Class of 83 was also in the news for being Bobby Deol's OTT debut, and the actor's pensive act, as seen in the trailers, had caught our attention. That also remains one of the few positives in what turns out to be an average crime thriller. Class of 83: Shah Rukh Khan Shares His Excitement To See Bobby Deol As Dean Vijay Singh In This BTS Video!

Directed by Atul Sabharwal, Class of 83 is about Vijay Singh (Bobby Deol), a police officer who has been appointed as a dean of a police training academy in 1982. A widower who has been estranged from his son, Vijay is like a phantom for the batch, who rarely sees him in classes. He is an figure of curiosity, especially for the batch's five underperformers - Vishnu Varde (Hitesh Bhojraj), Pramod Shukla (Bhupendra Jadawat), Lakshman Jadhav (Ninad Mahajani), Janardan Surve (Prithvik Pratap) and Aslam Khan (Sameer Paranjape), the latter also serving as a narrator.

In these five underdogs, Vijay Singh sees an opportunity to cleanse the police system from within, using them as antibodies. For Singh, known to be a well-known encounter specialist, was demoted to run the training school, after he stumbles upon a nexus between the underworld and the system, in which Chief Minister Patkar (Anup Soni) is also a part of.

He trains them with his own brand of syllabus and lets them into the system to wipe out the dreaded Kalsekar gangs Things, however, doesn't go as per his plan.

Watch the Trailer of Class of 83:

Class of '83 is inspired by S Hussain Zaidi's The Class of 83: The Punishers of Mumbai Police, a real-life account of cop Prakash Sharma, on whom Bobby Deol's character is moulded after. The book is about how the Mumbai police uses encounter specialists to take down rival gangs, after the city witnessed a surge of gangs in the decade. Class of 83: Bobby Deol Reveals He Was Drawn to Intensity and Depth of His Character in the Netflix Film.

Sabharwal's film is fictional, but it takes many real-life references, including the effects the infamous mill strikes on the city, the hippie culture and more. There are plenty of other nods and tributes to the '80s, including walls being plastered with posters of Nastik and Justice Chaudhary (a clever homage for the film's theme). At one point, Aslam compares Vijay's anger to a volcano bursting somewhere, though he may not be a resident of Jupiter. To many, it may sound like some silly comparison, but fans of Chacha Chaudhary comics, a popular staple of the era, will quickly catch that Sabu reference.

Class of '83 has such sly nods, and is bolstered by Viju Shah's era-apt BG score. Sabharwal, whose debut film Aurangzeb I am one of the few admirers of, has a good grip on the handling, and maintains the aesthetics needed to keep the movie gritty and realistic.

However, Class of '83, in living upto the era it is based on, also turns out to be a product that we have seen from cinema from that period. It also suffers from a very rushed editing work, especially in the second half.

The first half that is set during the training school is evenly paced and interesting, as we get to know the five young leads (three, to be more precise) and deconstruct the disturbed enigma of Dean Singh. It is once Singh selects his elite squad and incorporates them into the system, is where trouble comes for the film.

In its attempt to be as gritty and realistic as possible while also trying to be audience-engaging, Class of 83 stumbles in the second half. It is not that there are no merits in these portions. The actors are all too good, and there are some really good confrontational scenes, lifted by their performances. A scene where Vijay Singh confronts his old squad is a fine example of good writing and acting.

I also liked how Class of 83 shows the detrimental consequences of empowering encounter specialists. But like I mentioned before, these portions, including the ego clash between the squad, are hastily processed.

While the film currently stands at 98 minutes, this is one of the rare times I say that Class of 83 should have been at least 20 minutes longer. The sequences where Singh's 'Avengers' crumbles from within, in their efforts of not repeating the mistakes of their mentor, should have gotten more scope and screen-time.

The third act is a huge letdown veering very closely to Sholay, whose influence on the film cannot be missed even in the earlier scenes, leading to a whimper of the climax.

The performances are a saving grace for Class of 83. Some of the best scenes in the film are purely because the actors. Bobby Deol's poker face comes in advantage in many junctures, when the character doesn't need to reflect his emotions outwards. But the acto shines really well in a couple of emotional scenes towards the latter part of the film.

Have to say, though, that Deol Jr is overshadowed in Class of 83 by the five talented newcomers, especially Hitesh Bhojraj and Bhupendra Jadawat. They make Class of 83 turn out to be a decent watch, even when the writing and editing let down the film. They don't even make us miss the movie's biggest star, who is not present for most of the runtime. Anup Soni does well in his role of the corrupt Chief Minister. There is very little scope for female actors in the film,

Even though the actors have done well and there is a finesse to the film, Class of 83 turns out to be a very average affair. What could have a gripping tribute to furious '80s that changed Mumbai forever, also becomes a remnant of the era. Class of 83 is streaming on Netflix.

(The above story first appeared on LatestLY on Aug 21, 2020 03:53 PM IST. For more news and updates on politics, world, sports, entertainment and lifestyle, log on to our website latestly.com).