The first trailer of the upcoming romantic comedy, Comedy Couple, has dropped on the internet. Saqib Saleem and Shweta Basu Prasad play a couple, Deep and Zoya, in the film that does stand-up comedy together on the stage. 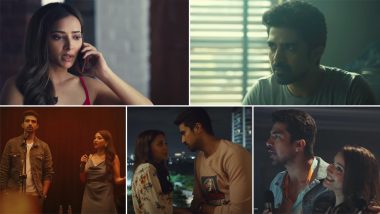 The first trailer of the upcoming romantic comedy, Comedy Couple, has dropped on the internet. Saqib Saleem and Shweta Basu Prasad play a couple, Deep and Zoya, in the film that does stand-up comedy together on the stage. "The only Indian couple" to do so, they say. But, no relationship is all laughs and smiles. Problems between the two youngsters seem to be surfacing from the fact that the Deep can't stop lying. And Zoya's has childhood issues which relate to her father being a liar. Shweta Basu Prasad Feels India Is Hung Up on the Idea of Fairness.

The funny bits of the film in the trailer does not exactly qualify for funny. Their bit on the stage also has no freshness. At the end of the trailer, a friend of Deep does point out that why is he not funny on stage when is in real life.

However, the emotional pathos of the film looks strong. Shweta and Saqib make for a cute pair. Shweta looks completely immersed in the emotional scenes. The melancholy of the plot might have gravitas. Looking forward to it. Saqib Saleem Reveals He Is Trying to Write a Secret Set of Stand-Up Comedy Since Past Five Years but Couldn’t Complete It.

Check Out Our Interview with Shweta Basu Prasad Here:

Directed by Nachiket Samant, Comedy Couple also stars Pooja Bedi and Aadar Malik. The movie will stream on Zee5 from October 21. Despite the lockdown, Saqib and Shweta seem to be having a good year. Saqib was also seen in the web-series, Crackdown, earlier. He will also be seen in the cricket film, 83, with Ranveer Singh and Deepika Padukone. Shweta was seen in season 2 of the show, Hostages. She also starred in the movie, High.

(The above story first appeared on LatestLY on Oct 09, 2020 09:26 PM IST. For more news and updates on politics, world, sports, entertainment and lifestyle, log on to our website latestly.com).