The two women accused - Munmun Dhamecha and Nupur Sarika - were sent to the Byculla Women's Jail, and the others - Arbaaz Merchant, Vikrant Chhoker, Ismeet Singh, Mohak Jaswal, and Gomit Chopra were sent to the ARCJ, along with Aryan Khan. 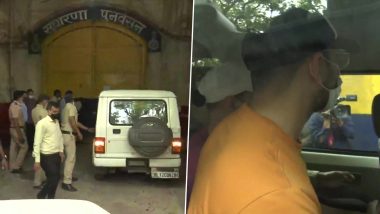 Since their arrest on October 3 - a day after their detention following the rave party raid aboard the Cordelia Cruise ship - they were kept for six nights in the NCB lockup in the central agency's custody, in south Mumbai till they were sent to judicial custody on Thursday by Additional Chief Metropolitan Magistrate R. M. Nerlikar. Mumbai Cruise Drugs Case: Aryan Khan and Other Accused Will Be Kept in Quarantine Cell for 3–5 Days in Arthur Jail, Says Jail Superintendent.

They will remain in the respective jails till they are granted bail, even as their lawyers and the Narcotics Control Bureau advocates were engaged in a fierce legal battle over this. This morning, all the eight accused youngsters underwent a medical test at the Sir J.J. Hospital, before they were taken to the jails by the NCB under tight security.

(The above story first appeared on LatestLY on Oct 08, 2021 06:09 PM IST. For more news and updates on politics, world, sports, entertainment and lifestyle, log on to our website latestly.com).