Deepti Naval suffered the first heart attack on Sunday and was brought to the Mohali hospital in a cardiac care ambulance late Monday. 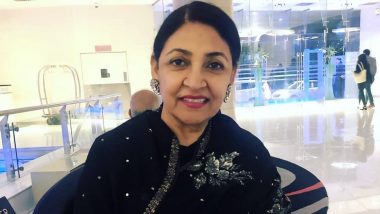 Veteran actress Deepti Naval was in Himachal Pradesh when she suffered a heart attack. She was immediately rushed to a local hospital in Manali and was later shifted to Mohali. She suffered the first heart attack on Sunday and was brought to the Mohali hospital in a cardiac care ambulance late Monday. The angioplasty then happened early Tuesday and fortunately, her condition is stable post the surgery. Deepti Naval Opens Up About Her Struggle With Depression and Suicidal Thoughts in the Early 90s.

The actress was staying at her cottage in Manali was quite some time and will hopefully return post her discharge. Speaking about her recovery, the doctors at Mohali's Fortis hospital in their conversation with IANS said that her condition was stable and she will likely be discharged soon. We wish the actress a very speedy recovery. Mahesh Manjrekar, Deepti Naval to Star in  Director Siddharth P Malhotra’s Web Show ‘Pawan & Pooja’.

Deepti Naval was quite shocked with Sushant Singh Rajput's death and had even penned a poem to describe her own fight with anxiety. "Anxiety grips me with both hands… Spiked claws dig deep into my soul...I gasp for breath and stagger around...Sharp corners of my single bed...A dark belligerent sea rises in anger...The night has a deadly mission, I can see...I will not succumb to its ghoulish lust," read her poem.

(The above story first appeared on LatestLY on Oct 20, 2020 03:48 PM IST. For more news and updates on politics, world, sports, entertainment and lifestyle, log on to our website latestly.com).