Neetu Kapoor shares a smiling photo of her late husband, Rishi Kapoor which also sees him holding a drink in his hand and it will melt your heart for sure. Read on. 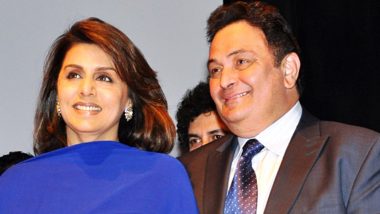 Veteran actor, Rishi Kapoor's demise has not only left the entertainment world in a state of shock, but his family members are also shattered and how. The superstar breathed his last on April 30, 2020, at Mumbai's HN Reliance Hospital at the age of 67. He passed away due to Leukemia. After battling with cancer for two long years, Rishi left for heavenly abode. While fans still can't get over the loss of the Kabhi Kabhie star, his wife Neetu Kapoor recently shared a photo of his late husband on Instagram with quite a heart-wrenching caption. And must say, it'll make you smile and teary-eyed at the same time. Rakesh Roshan Reveals How Ranbir Kapoor Consoled Him Over the Phone As He Broke the News Of Rishi Kapoor's Death.

In the shared post, we can see Rishi Kapoor flashing his broad grin along with holding a glass of drink. Neetu captioned the image as, "End of our story," with two heart emoticons. For the unversed, it was on January 22, 2020, when Rishi and Neetu celebrated their 40th anniversary. The two had got married in 1980. Not just a perfect real-life couple, Rishi and Neetu have also worked in many films together and have weaved magic during their time. Rishi Kapoor Death: 'Neetu is My Rock', 'Ranbir and Ridhima Have Shouldered My Problems' - Read the Actor's Old Interviews on Family and Career.

End of our story ❤️❤️

Rishi Kapoor was quirky and a no-nonsense star and his personality was also unique in its own way. The actor is survived by wife Neetu Kapoor, son Ranbir Kapoor and daughter Riddhima Kapoor Sahni. While Ranbir and Alia were by Neetu's side during the last rites, it was Riddhima who could not make it on time due to the nationwide lockdown. Stay tuned!

(The above story first appeared on LatestLY on May 02, 2020 01:11 PM IST. For more news and updates on politics, world, sports, entertainment and lifestyle, log on to our website latestly.com).