Rishi Kapoor Death: 'Neetu is My Rock', 'Ranbir and Ridhima Have Shouldered My Problems' - Read the Actor's Old Interviews on Family and Career

Kapoor's cinematic legacy consists of some amazing gems that will always be cherished by fans such as Chandni, Prem Rog, Karz and among the recent ones, D-Day, Kapoor and Sons, Mulk etc 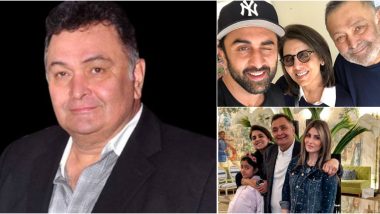 Veteran Bollywood actor Rishi Kapoor passed away on Thursday, April 30. The actor aged 67, was hospitalised on Wednesday night after he complained ofRead the Actor's Old Interviews on Family and Career breathing issues. He was admitted to the Reliance Foundation Hospital in Mumbai. Kapoor was known as one of India's finest actors and had a longstanding career in Bollywood where he went from being a chocolate boy in his early days to playing mature and challenging roles including characters of grey shade over the years. Kapoor's cinematic legacy consists of some amazing gems that will always be cherished by fans such as Chandni, Prem Rog, Karz and among the recent ones, D-Day, Kapoor and Sons, Mulk etc. Rishi Kapoor Passes Away at 67, Devastated Fans Pour Condolences On Twitter.

While Kapoor was a charmer on-screen, the actor's off-screen persona was equally amazing. He was one of the rare actors who was known for being outspoken and never shied away from giving his opinions. Rishi Kapoor in his numerous interviews spoke about his dear family, his childhood and particularly the moments he shared with veteran filmmaker and father, Raj Kapoor. More recently, after being diagnosed with cancer, the actor also spoke dearly of his wife Neetu Kapoor. After spending last year in US for his treatment, the actor in an interview revealed how his recovery had a lot to do with his wife. He said, "A lot of credit goes to my wife Neetu, who has been there as a rock.”

The actor was extremely fond and proud of his family and their film legacy. In one of the interviews, the actor proudly stated, "I am Prithviraj Kapoor’s grandson. Raj Kapoor’s son. I am Neetu Kapoor’s husband. Riddhima and Ranbir Kapoor’s father. I am Rishi Kapoor. I was born lucky and stayed lucky.”

That amazing feeling in your lows when there is Positivity 💃🏻Happiness 😁Love 🥰 and that Wink 😜!!!!

During the time that Kapoor was undergoing his treatment for cancer, the actor spoke about how his children and wife have stayed strong all through. He said, "Neetu has stood by me like a rock. Otherwise, I am too difficult a person to handle as far as food and drink are concerned. My kids Ranbir (Kapoor) and Ridhima (Kapoor) have really shouldered my problems."

Rishi Kapoor on Nepotism and Being a Star Kid:

Nepotism has become a big talking point today in Bollywood and coming from a film family himself, Rishi Kapoor had a rather straight take on that. In an interview, the actor was quoted satin, "There was no such nepotism because I was Raj Kapoor's son. You are nobody's son and you are only as good as your last film. There are so many other star sons who have not worked and it is a false belief that actors' children have it very easy. The audience is not watching a film because you are someone's son or daughter - Ranbir Kapoor is not a big star because of Rishi Kapoor."

The actor quickly became popular for being one of the most honest celebs on Twitter and after being asked about the same, he said, "I do enjoy it now because I find it entertaining. I do not see it as a boon or a bane. Unlike some who are diplomatic and talk only about their films, I am forthright and express what I feel is right." The Body on Netflix: Here's How You Can Watch Late Actor Rishi Kapoor's Last Bollywood Movie.

Rishi Kapoor's loss has come as a shock for his fans and the actor certainly will be dearly missed not only for his amazing on-screen presence but also his uninhibited off-screen personality. May the veteran star rest in peace!

(The above story first appeared on LatestLY on Apr 30, 2020 11:45 AM IST. For more news and updates on politics, world, sports, entertainment and lifestyle, log on to our website latestly.com).