Due to the current lockdown situation in Mumbai, several close friends of the star could not pay their last respects to the actor. 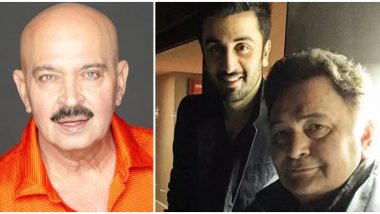 Veteran Bollywood actor Rishi Kapoor passed away on Thursday, April 30 after battling cancer for over two years. The actor's loss has left not only the film fraternity but also netizens devastated. Only a day, after everyone was trying to come to terms with actor Irrfan Khan's loss on April 29, the news of Rishi Kapoor's passing led to an atmosphere of immense despair. Kapoor was cremated at Mumbai’s Chandanwadi Electric Crematorium with close friends and family in attendance. Due to the current lockdown situation in Mumbai, several close friends of the star could not pay their last respects to the actor. Riddhima Kapoor Posts Saying ‘Driving Home Ma’ After Missing Father Rishi Kapoor's Funeral in Mumbai Due to Lockdown.

In an interaction with Midday, one of Rishi Kapoor's oldest friends and colleague from the film industry, Rakesh Roshan opened up about losing his dear one. The filmmaker stated that on hearing of Rishi Kapoor's hospitalisation, he was praying for a speedy recovery but unfortunately heard about the sad news about his friend's passing on April 30 morning. The Krrish director revealed that it was Ranbir Kapoor who broke the news to him and while he couldn't help but break down hearing about it, Ranbir was the one who consoled him. Speaking to Midday, Roshan said, "It was so shocking that I started crying on the phone. Instead of me consoling him, Ranbir comforted me. He has been a pillar of strength to his father." 'End of our story': Neetu Kapoor’s Bittersweet Post on Rishi Kapoor’s Demise Is Heartbreaking (View Pic).

Rakesh Roshan and Rishi Kapoor were a part of several movies together including the like of Jhoota Kahin Ka (1979), Khel Khel Mein and Aap Ke Deewane (1980) and more. The actor-director also recalled his last meeting with Kapoor, as he said, "When I met him in March before the lockdown, Chintu, Neetu and I reminisced about our good old days."

(The above story first appeared on LatestLY on May 01, 2020 12:36 PM IST. For more news and updates on politics, world, sports, entertainment and lifestyle, log on to our website latestly.com).