Political drama Madam Chief Minister, starring Richa Chadha, is all set to have a theatrical release on January 22, the makers announced Monday. The film is written and directed by Subhash Kapoor of Jolly LLB fame. 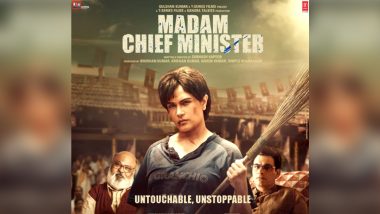 T-Series also shared the first look of the film, which is set in Uttar Pradesh, on Twitter. Richa Chadha on Adult-Film Star Shakeela: To Celebrate Her, You’ll Have to Admit That You Watched Those Films.

The poster features Chadha with a broom in her hand, alongside Kaul and Shukla, with "Untouchable, Unstoppable" as tagline. "Presenting to you, the first look of #MadamChiefMinister, a gut shaking political drama starring Richa Chaddha, Manav Kaul and Saurabh Shukla! Out in cinemas on 22nd January! Stay tuned!" T-Series tweeted. Shakeela Teaser: Richa Chadha Sheds All Her Inhibitions as the Popular South Softcore Star (Watch Video).

Chadha said the film is about an untouchable who braves all odds in life.

"Glad to present to you all, my new movie #MadamChiefMinister, a political drama about an 'untouchable' who hustles and makes it big in life!" she tweeted. Madam Chief Minister also features Akshay Oberoi and Shubhrajyoti in pivotal roles. This would be Chadha's second theatrical release amid the coronavirus pandemic, after Shakeela which hit cinema halls last month.