Farhan Akhtar is all set to get married with Shibani Dandekar in an intimate wedding. The couple who has been dating since 2018 are said to get hitched on February 19. Here's all you need to know about the D-day! 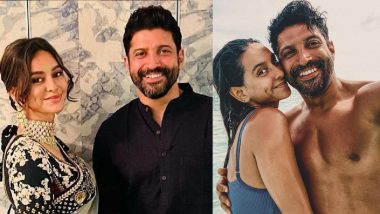 Celebrity weddings always become the talk of the town. As after Vicky Kaushal-Katrina Kaif and Mouni Roy-Suraj Nambiar's shaadi, it's Farhan Akhtar and Shibani Dandekar, who are all set to enter the wedlock soon. The couple who have earlier postponed their wedding due to COVID-19, will finally be pronounced husband-wife this month. For the unaware, Shibani and Farhan Akhtar made their love official in 2018 and fell in love on the sets of reality show I Can Do That. Farhan Akhtar–Shibani Dandekar’s Rendition Of Bradley Cooper–Lady Gaga’s Shallow Is The Perfect Throwback Video Fans Must Watch Ahead Of Their Wedding.

Having said that, just in case, you are curious to know all the deets about Farhan Akhtar and Shibani Dandekar's wedding, then you are at the right place. From the wedding date, venue and more, here are all the things we know about the shaadi. Read on.

With pre-wedding festivities already in full swing, Farhan and Shibani are all set to tie the knot on February 19, 2022 in an intimate shaadi. For the unaware, the duo had their mehendi ceremony yesterday (February 17), and today (February 18) is the sangeet.

Farhan and Shibani will get married on February 19 at Javed Akhtar and Shabana Azmi's Khandala farmhouse. Earlier, it was reported that the shaadi will be as per Maharashtrian rituals, but it seems that's not the case. Farhan Akhtar-Shibani Dandekar Pre-Wedding Festivities Begin; Rhea Chakraborty Spotted at the Haldi and Mehndi Function (View Pics and Video).

No Nikah or Marathi Wedding For The Couple

A source close to the couple revealed to India Today, “They wanted to keep it as basic and simple as possible. The guests have also been asked to wear easy colours like pastels and whites for the wedding. There won’t be a nikah or a Marathi wedding. Instead, they have chosen to make it an intimate vow ceremony. Both have written down their vows which they will read out on the main wedding day, which is February 19.”

Reportedly, after the main wedding on February 18, Farhan and Shibani are likely to go for a court marriage on February 21, 2022.

Farhan Akhtar and Shibani Dandekar have been seeing each other for over four years now. FYI, this is not Farhan's first marriage, as he was earlier married to hairstylist Adhuna Bhabani. However, the two parted ways in 2017.

(The above story first appeared on LatestLY on Feb 18, 2022 04:20 PM IST. For more news and updates on politics, world, sports, entertainment and lifestyle, log on to our website latestly.com).