Produced by Bhushan Kumar, Ishare Tere is a romantic track that is composed, written and sung by the popular Punjabi singer Guru Randhawa. 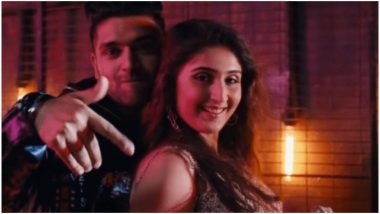 The latest T-Series single, Ishare Tere, is trending the charts these days. Produced by Bhushan Kumar, Ishare Tere is a romantic track that is composed, written and sung by the popular Punjabi singer Guru Randhawa. Joining him in belting the song is the up and rising Dhvani Bhanushali, who has recently delivered another chartbuster in the Dilbar Dilbar remix (along with Neha Kakkar) from the recently released, John Abraham-starrer, Satyameva Jayate.

And like Dhvani's earlier track, Ishare Tere has garnered enough attention on various platforms. Released in July, the song has crossed 100 Million views. Picturised on both Guru and Dhvani, Ishare Tere has 187 million views by now. Sharing her happiness with the media, Dhvani said, "I cannot contain my happiness. I am extremely grateful to Guru Randhawa, Bhushanji, and T-Series for giving me this opportunity. I had a great learning experience with them and with Neha as well. Also, a huge thank you to the audience for their extreme love and support."

Check out the song below -

Earlier in a statement to the media, Guru had this to say about the song, “Ishare Tere is my first song ever to be shot in the club. The structure and tonality of this song are very different from my other songs. The video is shot beautifully and I am very excited about the song. The song has a funny banter between the male and female vocals who are flirting with each other too. Our Punjabi songs had these kinds of lyrics, I have just tried to revive those. I hope the audience likes the song.” Congrats to the entire team for the success of this track!

(The above story first appeared on LatestLY on Aug 28, 2018 06:18 PM IST. For more news and updates on politics, world, sports, entertainment and lifestyle, log on to our website latestly.com).