Hrithik Roshan: Saif Ali Khan Was Never Desperate To Become A Hero; Has Always Been Secure In His Head!

Reflecting on Saif Ali Khan's journey, his method, and the way he has evolved in terms of the various characters he has portrayed in films he has done, over the years, Hrithik maintains that Saif was never desperate to become a hero and has always been honest to himself. 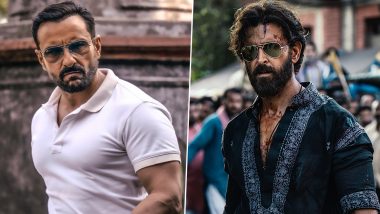 Hrithik Roshan who will be seen pairing up with Saif Ali Khan in the promising-looking Vikram Vedha was all effusive with his praise and admiration for co-actor Saif Ali Khan. Hrithik has observed Saif from close quarters since the 90s and he doesn't hold back his excitement to have worked with Saif. "Saif Ali Khan is one of the most honest actors I have seen. He is so honest to himself and to the material that is given to him, that you cant help bit admire him. His honesty makes him such a fun person to be around," said the Greek God Of Bollywood.

Reflecting upon Saif's journey, his method, and the way he has evolved in terms of the various characters he has portrayed in films he has done, over the years Hrithik maintains that Saif was never desperate to become a hero. "In the 90s and early 2000s when everybody wanted to become the "Hero" material, Saif was always cool with his craft. He never wanted to become a hero-hero type as he was always been comfortable in his own space and his own skin. He has always been secure in his head which is so remarkable. There's so much I could learn from him." Vikram Vedha Song Bande: Hrithik Roshan and Saif Ali Khan Are Tough Lads in This Kickass Track (Watch Video)

On being asked if the two could swap the roles in Vikram Vidha and did that thought ever occurr to the duo, Hrithik chuckled," After having seen what Saif has done in this film, I don't think I could pull off what he has achieved." In another instance, Hrithik also marinated that Saif is the most vocal and expressive guy ever with no filter whatsoever and believes in speaking his mind. Vikram Vedha Duo Saif Ali Khan and Hrithik Roshan Try To Remember Their Dance Steps in This Hilarious Video – Watch

"While most of us have two voices going on in our head. The one that we make others hear and then the one that we keep to ourselves. With Saif there's no filter. He will just say what he feels like and that kind of transparency is so rare. If that affects the other person, it's their problem, not Saif's" laughed Hrithik.

(The above story first appeared on LatestLY on Sep 28, 2022 03:09 PM IST. For more news and updates on politics, world, sports, entertainment and lifestyle, log on to our website latestly.com).