Actor Saif Ali Khan and Tabu's next outing co-starring Alaya Furniturewala, Jawaani Jaaneman, is all about living the carefree life, which eventually comes with consequences. 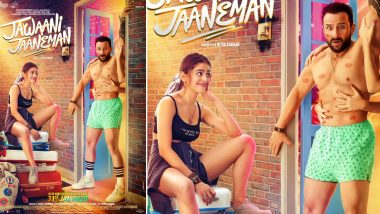 Actor Saif Ali Khan and Tabu's next outing co-starring Alaya Furniturewala, Jawaani Jaaneman, is all about living the carefree life, which eventually comes with consequences. A playboy (Saif Alli Khan) lives life king-size until a 20-year-old girl (Alaya Furniturewala) comes into his life, claiming to be his daughter. Soon follows the entry of her mother (Tabu) who then reveals that she isn't sure if Saif is the father to her daughter. And the bombs keep dropping on Saif when his 'alleged' daughter states that she is pregnant. Jawaani Jaaneman: Saif Ali Khan Recreates Marilyn Monroe's Iconic Pose on the New Poster Also Featuring Debutante Alaya F (See Pic).

After the fun-filled trailer launch and the release of the movie's first song "Gallan Kardi", we know that Jawaani Jaaneman will also see the much-hyped revamped version of Saif's Yeh Dillagi hit "Ole Ole", which is yet to be released. With barely 10 days left for the movie to hit the screens, a new poster of the movie has been launched.

Check Out The Poster Below:

In the poster, we see Saif donning green boxer-shorts and has kiss marks all over his chest, while his on-screen daughter looks on and is clearly NOT surprised. Saif Ali Khan To Recreate 'Ole Ole' in a New Rehashed Version of the Song for Jawaani Jaaneman.

Saif was quoted in an earlier interview as saying, "Jawaani Jaaneman is a story about a man accepting his age, his responsibilities and his journey in life. I think the father is one of the most important people in our lives. A lot of people mess up being a father and create children that need therapy, that need friendship and that need all kinds of things to fix their problems because they are not ready to be responsible fathers. In the film, my character is not ready. He thinks that (having) a family is not cool, and the solo life is the way to go." Jaawani Jaaneman released on January 31, 2020.

(The above story first appeared on LatestLY on Jan 21, 2020 11:41 AM IST. For more news and updates on politics, world, sports, entertainment and lifestyle, log on to our website latestly.com).