Jumanji: The Next Level Beats Mardaani 2 And The Body on Day 1, As Per Early Estimates

Jumanji: The Next Level performs far better than Mardaani 2 and The Body if early estimates are anything to go by. 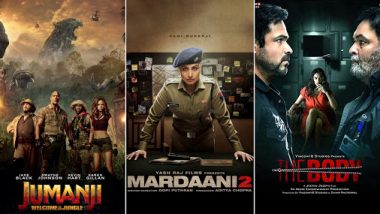 Mardaani 2 and The Body are the two releases of last Friday along with Jumanji The Next Level. Mardaani 2 and The Body both started pretty slow. That could also be because reviews for both the movies came in late in the day which could have affected the morning shows. It has definitely affected its first-day income if early estimates are anything to go by. Trade was expecting Rs 4-6 crore earnings on Day 1 but apparently, the movie has earned only Rs 3.50 crore. Mardaani, the first film, had earned Rs 3.49 crore on its first day. Mardaani 2 HD Full Movie Leaked on TamilRockers for Free Download & Watch Online: Rani Mukerji’s Crime Drama Becomes a Victim of Online Piracy!

As for The Body, despite the less hype and promotion of the film, it was supposed to earn Rs 1-2 crore on Day 1 but it seems it couldn't even reach that mark.

Both films collected ₹ 50 lakhs less than my prediction. https://t.co/WpZyCHmJpw

As per Box Office India, Jumanji: The Next Level is doing far better than the Hindi movies. Taran Adarsh also tweeted the same.

This means it has beaten both Mardaani 2 and The Body. Both the Hindi films will be built at the box office on word of mouth. Mardaani has more chances of picking up because it takes a burning topic of brutal rapes in its narrative.

(The above story first appeared on LatestLY on Dec 14, 2019 12:53 PM IST. For more news and updates on politics, world, sports, entertainment and lifestyle, log on to our website latestly.com).