Kajol Birthday Special: From Baazigar To Dilwale - Here's How Much The Actress' Pairing With Shah Rukh Khan Earned At The Box Office

Together, Kajol and Shah Rukh Khan have set the cash-registers ringing multiple times. In fact, they never delivered a flop till date. So on her birthday, let us tell you about Kajol's movies with SRK and their box office numbers 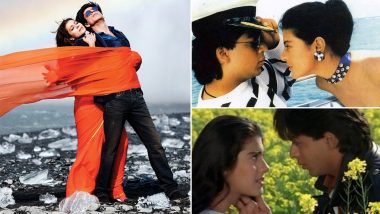 Kajol celebrates her birthday and we are super glad that she was born. Kajol is different from every actress who has ever joined the industry. She is perky, effervescent, lively, loud, and exceedingly talented. It's a shame that she doesn't get rewarding characters to play or she would have been India's answer to Kate Winslet. One other thing that we often mention while talking about Kajol is her beautiful pairing with Shah Rukh Khan. There's something about these two, even when they are not a  real-life couple. They are BFFs in real life and we are fiercely protective about them. It's not just restricted to their on-and-of-screen presence but box office as well. Together, these two have set the cash-registers ringing multiple times. In fact, they never delivered a flop till date. So on her birthday, let us tell you about Kajol's movies with SRK and their box office numbers.  Chatu Mandota’s Hilarious ‘Kuch Kuch Hota Hai’ Spoof of SRK-Kajol Iconic Scene Is Unmissable! See Viral Video of East African Comedian

Baazigar was a breakthrough movie for both Kajol and SRK, who were still waiting to make a footing in the cinema world. Although Darr had made SRK pretty popular as the villain, Baazigar added a new dimension to his evil side - anti-hero. What stood out along with everything else is the ravishing chemistry between Kajol and SRK. The film was apparently made at a budget of Rs 2 crore!

Karan Arjun is perhaps one of the most successful reincarnation stories ever. It's an ensemble film with SRK and Salman taking the lead but who doesn't remember 'Jaati hu main?'

There's hardly anything left to say about DDLJ. It shaped Indian cinema in more ways than one. It is the longest-running Hindi movie ever. It's a dream that everyone sees while aspiring to be an actor. Simran and Raj's love is what everyone wants to have for real. Kajol played a dutiful daughter who falls in love with a brat. She transitions from an obedient daughter to a smitten girl waiting to unite with her love so well, there's still no one who could match that.

Today's generation has a flawed understanding of Rahul's character in the film and overwhelmingly supports Anjali, played by Kajol. We wanted to be her...we wanted to be the carefree best friend of the college's 'cool' guy. We wanted to have a chill-out attitude like her. No wonder that the film is still one of the most discussed movies on the internet.

Kabhi Khushi Kabhie Gham was all about family and parents. Kajol played the lively and loud Anjali from Chandni Chowk who didn't fit the Raichand's rich kingdom. Yet love happens between her and Rahul Raichand or SRK. Although Kajol is a pro at such characters, she slips into a much mellowed down version of the same in the second half effortlessly. Kajol Birthday: Here Are The 6 Best Songs Featuring The Timeless Beauty Of Bollywood!

MNIK did a lot of things. Established Karan Johar as a realist director, Shah Rukh Khan as a great actor and Kajol as a supreme performer. Unlike anything she did in her previous SRK movies, Kajol is just her. Sweet, lovely and with an infectious personality. That's why when she breaks after her son's death, you feel her despair and her decision.

One of the weakest and perhaps the most terribly executed film of SRK-Kajol, Dilwale managed to be a box office sensation just because these two were reuniting. But the only highlight of this otherwise disappointing fare is the scene before the interval when it is revealed Kajol has played SRK. Whoa!!! That walk, that attitude...what an epic scene!

(The above story first appeared on LatestLY on Aug 05, 2021 08:50 AM IST. For more news and updates on politics, world, sports, entertainment and lifestyle, log on to our website latestly.com).