Kangana Ranaut to Essay the Role of Former Prime Minister Indira Gandhi Next, Says It Is Not a Biopic

The period film will be mounted on a very big scale, and have actors portraying Sanjay Gandhi, Rajeev Gandhi, Morarji Desai, and Lal Bahadur Shashtri among other prominent figures. 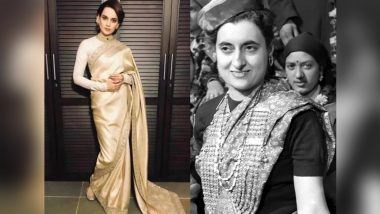 Mumbai, Jan 29 (IANS): Kangana Ranaut will essay the role of former Prime Minister Indira Gandhi in an upcoming political drama. The actress says the yet-untitled film is not a biopic and has also revealed that many prominent actors will be a part of the upcoming project. Media Frenzy on Kangana Ranaut's Flight: IndiGo Responds After DGCA Notice Over Onboard Chaos.

"Yes, we are working on the project and the script is in the final stages. It is not the biopic of Indira Gandhi, it is a grand period film, to be precise a political drama that will help my generation to understand (the) socio-political landscape of current India," said Kangana, in a statement released by her office.

"Many prominent actors will be part of this film and of course I am looking forward to playing the most iconic leader that we have had in the history of Indian politics," said the actress. Kangana added that "the film is based on a book", although she did not elaborate on which written work.

The actress will produce the film that will feature Emergency and Operation Blue Star. Director Sai Kabir, who worked with Kangana earlier in "Revolver Rani" will write the story and screenplay, and also direct the project. Kangana Ranaut Shares Visuals of Her Razed Office by BMC, Calls the Demolition #DeathofDemocracy.

The period film will be mounted on a very big scale, and have actors portraying Sanjay Gandhi, Rajeev Gandhi, Morarji Desai, and Lal Bahadur Shashtri among other prominent figures.

Kabir flew to Bhopal where the actress is currently shooting for "Dhaakad" and has already done a few sittings with the actress. The screenplay is ready, according to sources.

(The above story first appeared on LatestLY on Jan 29, 2021 02:14 PM IST. For more news and updates on politics, world, sports, entertainment and lifestyle, log on to our website latestly.com).