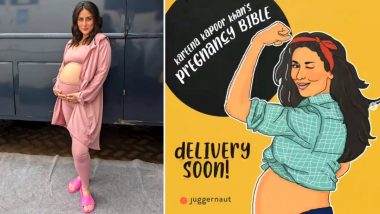 I'll talk about everything from morning sickness to diet and fitness and being a mom-on-the-go! I can't wait for you to read it. To be published by Juggernaut Books in 2021," she wrote. Kareena is married to Bollywood actor Saif Ali Khan. The two, who are fondly called as Saifeena by their fans, got married in 2012. She gave birth to their first born, Taimur, in 2016. Taimur Ali Khan Turns 4! Kareena Kapoor Khan Says, ‘Chase Your Dreams And Keep Your Chin Up My Boy’

She is currently expecting her second baby with Saif and she often shares photographs of her baby bump on social media. Kareena and Saif had announced on August 12 that they are expecting their second child. The actress recently completed her shoot for the upcoming film "Laal Singh Chaddha" co-starring Aamir Khan in Delhi.

(The above story first appeared on LatestLY on Dec 20, 2020 04:06 PM IST. For more news and updates on politics, world, sports, entertainment and lifestyle, log on to our website latestly.com).