Kartik Aaryan had dropped the teaser of his upcoming film titled Dhamaka and had also revealed then that the shooting of the film will commence from December. 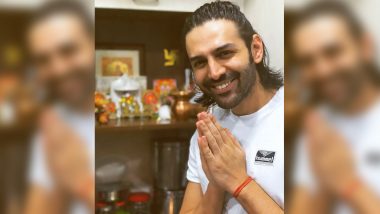 Kartik Aaryan had dropped a ‘Dhamaka’ on the occasion of his birthday. He dropped the teaser of his upcoming film titled Dhamaka and had also revealed then that the shooting of the film will commence from December. In the teaser, the actor had donned a formal avatar, while he sports a pair of spectacles and looks at a blast on a bridge. Now, he has shared an intriguing picture on Instagram in which he has revealed that he is soon set to begin the shooting of the film and also a shared a glimpse of his mom who seemed to be all worried. Dhamaka: Kartik Aaryan Makes the Big Announcement on his Birthday, Shares His First Look from Ram Madhvani's Next.

After been at home for months owing to lockdown, Kartik Aaryan now gears up to be back on sets of the film. In his latest post he shared that he would be leaving home for the shoot of Dhamaka, but before that he is seeking the Lord and his parents’ blessings. The actor shared a glimpse of his mom looked worried for him as he is stepping out amid pandemic.

Kartik Aaryan is set to play the role of a journalist in Dhamaka that is based completely in Mumbai. Directed by Ram Madhvani, the lead actor would be seen covering a terror attack. Rumors are also rife that Mrunal Thakur would be seen as the leading lady. However, an official word is awaited on the same.

(The above story first appeared on LatestLY on Dec 13, 2020 09:01 AM IST. For more news and updates on politics, world, sports, entertainment and lifestyle, log on to our website latestly.com).