Kartik Aaryan Shares an Old Memory When He Jumped Barricades to Meet Sagarika Ghatge and Deliver a Message for Shah Rukh Khan! 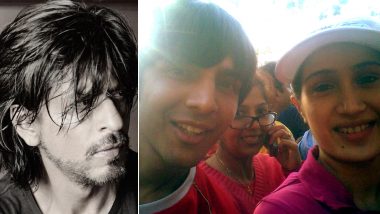 Kartik Aaryan has time and again proved that he is a huge fan of Bollywood superstar Shah Rukh Khan. Not just this, the Pati Patni Aur Woh actor has also confessed that SRK has been one of the major reasons which made him enter the world of showbiz. Now, going by the latest Instagram update of Aaryan, all we can say that yes he was and still is a fan of King Khan. The young lad took to his social media and shared a memory from the past which is from Mumbai Marathon, 2008. Kartik Aaryan Workout and Diet: Fitness Regime That Helps The 'Love Aaj Kal 2' Actor Maintain His Sculpted Body.

The photo shared by the actor sees him in quite an unrecognisable avatar posing next to Sagarika Ghatge, who was part of Shah Rukh Khan's film Chak De! India. Along with the pic, Kartik also revealed how he jumped barricades to get a selfie with Sagarika AKA Preeti Sabharwal. Later, he also mentioned about how he passed on a message for SRK via the actress. "2008 Mumbai Marathon!! I jumped barricades to take a pic with Preeti Sabharwal @sagarikaghatge n also told her “Shah Rukh Khan ko mera Hi bolna” @iamsrk," Kartik's post caption read. Kartik Aaryan's 'Nibba-Nibbi' Tweet While Promoting Love Aaj Kal With Arushi Sharma Gets Him in Trouble, Twitterati Calls Him Racist.

That's not it, as Sagarika replied to Aaryan's post wherein she wrote, "Omg this took me back in time and what a great marathon you are having since you jumped that barricade." Coming back to the pic, it's indeed cute and sees Kartik as a thin little boy who was not even aware that one day he'll also be a huge star. Stay tuned!

(The above story first appeared on LatestLY on Jun 30, 2020 08:41 AM IST. For more news and updates on politics, world, sports, entertainment and lifestyle, log on to our website latestly.com).