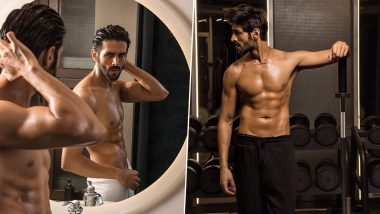 Kartik Aaryan is the current heartthrob of the nation and immensely popular amongst the youth. He made his debut in Bollywood with the film Pyaar ka Punchnama in the year 2011. However, he rose to fame with his acting in Sonu Ke Titu Ki Sweety which released in the year 2018. Kartik Aaryan is blessed with a well-defined face cut, which adds a charm to his look and in addition to that, he has a lean body. Let's take a look at the fitness regime of the Love Aaj Kal 2 actor along with workout and diet plan that helps him maintain his well-sculpted body. Kartik Aaryan Loses 8kgs for His School Boy Look in Love Aaj Kal (View Pic)

Kartik Aaryan was born on November 22, 1990, in Gwalior, Madhya Pradesh. He pursued an engineering degree in biotechnology from DY Patil College of Engineering, Navi Mumbai. Initially, when Kartik Aaryan started his filming career, he was skinny. However, with time, he developed a lean muscular body. The Bollywood actor is so fit that he completes 200 push-ups every day. Kartik Aaryan, the Chocolate Boy in a Teddy Bear Moschino Jumper!

As per ndtv.com, Kartik Aaryan performs exercises like push-ups, skipping almost every day, to look absolutely lean. Apart from that, he also performs weight training where he trains all muscles individually. In addition to that, the Bollywood actor also includes core exercises like cycling crunches, leg crunches and crunches with weights. Sometimes Kartik also prefers to do mountain climbing as a part of his exercise regime.

Kartik Aaryan is a vegetarian, which means he derives nutrients from plant-based foods. In an interview with NDTV, the actor revealed that he drinks lukewarm water with lemon and honey, first thing in the morning, without fail. He believes that this help in cutting fat accumulation. Apart from that, he keeps himself hydrated throughout the day and eats after every two hours. This aids in keeping the metabolic rate of his body high. Also, the Pyaar ka Punchnama actor eats food low in carbohydrates and avoids sugar intake. He doesn't drink regular tea, and instead, takes green tea.

Kartik Aaryan's fitness regime inspires many youngsters to eat healthy foods and take out time for exercise. The actor will soon be seen opposite Sara Ali Khan in a romantic drama Love Aaj Kal 2 which is scheduled to release on February 14, 2020.

(The above story first appeared on LatestLY on Feb 02, 2020 08:15 AM IST. For more news and updates on politics, world, sports, entertainment and lifestyle, log on to our website latestly.com).