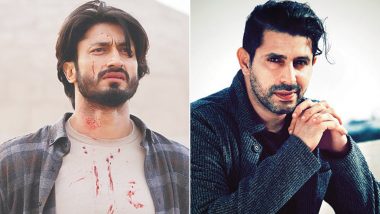 Vidyut Jammwal and director Faruk Kabir team up for an enticing action movie titled Khuda Haafiz. It is all set to premiere on Disney+ Hotstar on August 14. Great news for the fans is that the Commando actor introduces a special viewing experience for the viewers. Yes, Vidyut will be going live on the streaming platform along with Faruk Kabir to watch and interact with the audiences. The film's trailer has already received a welcoming response from Netizens and the movie does look promising, so how about watching it with the stars of the film? [Exclusive] Vidyut Jammwal Shares First Memories of Love With Funny Anecdote When Landline Played Spoilsport (Watch Video)

Announcing the news, the actor tweeted "Calling all Jammwal-LIONS to the First Day First show of KHUDA HAAFIZ! Watch & Chat with me & @faruk_kabir LIVE, only on Disney+Hotstar app & Instagram 14th August,7 pm! Mark your calendars, waiting to see you all! Khuda Haafiz is the third movie slated to release under Disney+ Hotstar Multiplex." Mera Intezaar Song from Khuda Haafiz: Vidyut Jammwal and Shivaleeka Oberoi’s Beautiful Song About Love and Longing is a Gem (Watch Video)

Calling all Jammwal-LIONS to the First Day First show of KHUDA HAAFIZ!

Mark your calendars, waiting to see you all!#KhudaHaafiz streaming from 14th August only on @DisneyplusHSVIP pic.twitter.com/wMHAKhbZSK

Khuda Haafiz stars Vidyut Jammwal, Shivaleeka Oberoi, Annu Kapoor, Aahana Kumra, and Shiv Panditt. It is written and directed by Faruk Kabir, and produced by Kumar Mangat Pathak and Abhishek Pathak (Panorama Studios International). The music is scored by Mithoon. Khuda Haafiz is set to release on August 14, 2020, only on Disney+ Hotstar VIP. Vidyut Jammwal was last seen in Tigmanshu Dhulia's Zee5 film Yaara that premiered on July 30. This is actor's second film releasing with a month's time. So are you excited to interact with Bollywood's most acrobatic action-hero? Let us know in the comments section below.

(The above story first appeared on LatestLY on Aug 13, 2020 01:40 PM IST. For more news and updates on politics, world, sports, entertainment and lifestyle, log on to our website latestly.com).