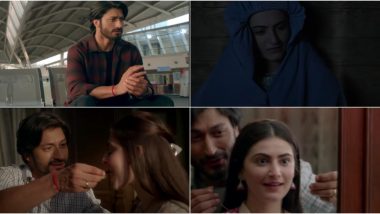 Vidyut Jammwal is all set to have the digital release of his upcoming action film, Khuda Haafiz. The film's trailer was released recently and it looks like it will make a for a riveting watch. Jammwal teams up with actress Shivaleeka Oberoi for the film. A brand new track from the film, "Mera Intezaar" has now been released and it is a beautifully soothing number that captures the feeling of longing. The song video showcases the lead couple being separated from each other after she gets kidnapped and Vidyut's character is in search of her. Khuda Haafiz Trailer: Vidyut Jammwal's Romantic Action Thriller Inspired by True Events, Packs Enough Punch (Watch Video).

The song is also a special one for music enthusiasts considering this is the first time Armaan Malik collaborates with music composer Mithoon for a song. Armaan's gorgeous vocals compliment the song's sombre setting. Vidyut is seen remembering all sweet moments spent with his wife before she goes missing. Shivaleeka too is seen missing Vidyut's character in this song video. "Mera Intezaar" is a slow ballad that is sure to make you fall in love with it. The song's lyrics have been penned by Mithoon. Khuda Haafiz Song: Vidyut Jammwal's Emotional Track Gets a Refreshing Treatment From Mithoon (Watch Video).

As for the film, Khuda Haafiz is said to be based on a real-life story. The film also stars Shiv Panditt, Aahana Kumra, Vipin Sharma and Nawab Shah in key roles. Khuda Haafiz has been written and directed by Faruk Kabir. It has been produced by Kumar Mangat Pathak & Abhishek Pathak. The film is all set to premiere on August 14 on Disney+ Hotstar.

(The above story first appeared on LatestLY on Aug 10, 2020 02:26 PM IST. For more news and updates on politics, world, sports, entertainment and lifestyle, log on to our website latestly.com).