Kriti Sanon is one busy actress these days. After the recent success of Bareilly ki Barfi and Luka Chuppi, the actress is on a signing spree and has confirmed working on a project that revolves around surrogacy. The movie will be helmed by Laxman Utekar and produced by Dinesh Vijan's Maddock Films. 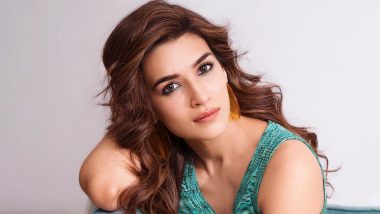 Kriti Sanon is busy hunting for the right scripts that would bring the actor in her on display. After the recent success of Bareilly ki Barfi and Luka Chuppi, she's clearly on cloud nine and believes in relying on the right content. She has witnessed success in a short span of time and we bet the future ahead will be equally promising for her. After announcing her next project with Rahul Dholakia, Kriti recently confirmed working on another story based on surrogacy.

The Dilwale actress in her recent conversation with Filmfare confirmed collaborating with Dinesh Vijan's Maddock Film for a story about surrogacy. When asked to divulge some details about the same, Kriti said, "Yes, it’s an exciting project with Maddock Films, yet untitled. It’s an entertaining story with its heart in the right place. It’s going to be directed by my Luka Chuppi director, Laxman Utekar. I share a great bond with him. It was an idea initially, which has shaped into a script, better than I expected. " Here Is Kriti Sanon's Take On Various Box Office Performances, From Bareilly ki Barfi to Luka Chuppi.

Earlier we read reports of how the actress has demanded a 40 per cent hike in her fees for the same project. "If one considers the responsibility of carrying this film on her shoulders, coupled with her past successes, Kriti is fair in asking for a pay hike. For her forthcoming films, including the Rakeysh Omprakash Mehra project that she is in talks for, she is expected to command a fee which is a 40 per cent jump from her current remuneration," said a source close to her to Mid-Day. Guess, filmmakers don't shy away from appreciating talents these days and we mean monetarily. Someone recently said it's a good time to be an actor and we second that thought.

(The above story first appeared on LatestLY on Aug 29, 2019 10:00 PM IST. For more news and updates on politics, world, sports, entertainment and lifestyle, log on to our website latestly.com).