Jim posted a picture from the Sanjay Leela Bhansali’s magnum opus and Ranveer has the best comment for it. With a panther emoji the 32-year-old superstar actor wrote “Sex panther.” 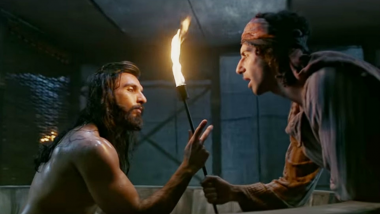 Malik Kafur aka Jim Sarbh’s character was one of the most appreciated ones from the recently released Padmaavat. The chemistry between Ranveer Singh’s Alauddin Khilji and his slave Malik Kafur created magic on the screen. Social media has got us a perfect proof that their charm is leaking out into real life. Yes, you heard it right! On February 13, Jim posted a picture from the Sanjay Leela Bhansali’s magnum opus and Ranveer has the best comment for it. With a panther emoji the 32-year-old superstar actor wrote “Sex panther.”

While Jim’s fans and followers on Instagram could not control their laughter at Ranveer’s comment, popular Bollywood actress Radhika Apte commented with a wink emoji on the same post.

With his remarkable talent and sharp looks, Jim Sarbh has made a mark in the showbiz. He made his debut with Sonam Kapoor-starrer Neerja in 2016 where he featured as the main antagonist. Jim received much appreciation in role of dreaded terrorist in the biopic based on slain Indian air purser Neerja Bhanot. And again, in Padmaavat, you definitely would not have missed the sizzling chemistry between him and Ranveer playing their memorable characters. If you still need a reason to watch Bhansali’s epic-drama, catch the song Binte Dil reflecting the passion between the duo!

Jim Sarbh will be next seen in Aditya Vikram Sengupta directorial Jonaki, a Bengali film. The movie is about an 80-year-old woman, who goes into coma and recounts the time she has spent with her lover— played by Sarbh. Whereas, Ranveer is busy with the shoots of Zoya Akhtar’s Gully Boy opposite Alia Bhatt and Simbaa, directed by Rohit Shetty.

(The above story first appeared on LatestLY on Feb 14, 2018 08:08 PM IST. For more news and updates on politics, world, sports, entertainment and lifestyle, log on to our website latestly.com).