The first look of Kriti Sanon's next film, Mimi, was launched today. The movie will reunite Kriti with her Luka Chuppi co-star, Pankaj Tripathi, and director, Laxman Utekar, for Mimi. The shooting of the film will begin soon. 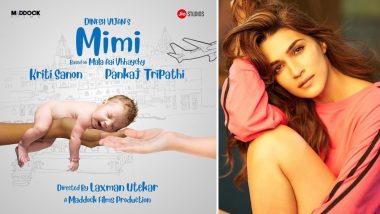 Kriti Sanon and Pankaj Tripathi played the cigarette sharing father-daughter duo in Bareilly Ki Barfi. They hit the right chords with the audience, later also sharing the screen in Luka Chuppi. Now they are reuniting again. The two actors will be seen sharing the screen space in a film titled, Mimi, the announcement of which was made today. Mimi is adapted from the National Film Award-winning Marathi film, Mala Aai Vhhaychy. The original featured two actresses in lead roles. So, we wonder if the name of a second actress will be announced soon for Mimi, or the screenplay has been adapted to revolve around Pankaj and Kriti's characters only. Are Kriti Sanon And Kartik Aaryan Still Not On Talking Terms After Luka Chuppi Controversy? She Answers!

The original film dealt with surrogacy in India. A US-based woman hires an Indian surrogate to carry her child. During the pregnancy, the doctors reveal that the child will be born with disabilities. The US-woman flees the scene leaving the surrogate to care for the child. She returns after a change of heart and a custody battle begins between the two women.

Life is a journey filled with unexpected miracles.

Get ready for a journey like never before, #Mimi !!

Earlier in an interview with Filmfare, Kriti talked about Mimi, without disclosing the title. She said, "It’s an entertaining story with its heart in the right place. It’s going to be directed by my Luka Chuppi director, Laxman Utekar. I share a great bond with him. It was an idea initially, which has shaped into a script, better than I expected."

The first poster of the film does not feature either, Pankaj or Kriti. Rather, the first look is all about subtext. You get a whim of what the movie might be about with the artsy poster. While sharing the first poster, Pankaj called Kriti his favourite and the two stars had a very sweet conversation on Twitter. Mimi will be directed by Laxman Utekar, who was also at the helm of Luka Chuppi, earlier this year. The shooting of the Mimi will begin soon.

(The above story first appeared on LatestLY on Aug 30, 2019 11:39 AM IST. For more news and updates on politics, world, sports, entertainment and lifestyle, log on to our website latestly.com).