Mothers was very important to the Bollywood narrative in since forever. Although now they have become far and few, they never failed to make us love our mothers more. Behold 11 such on-screen moms we are really fond of. 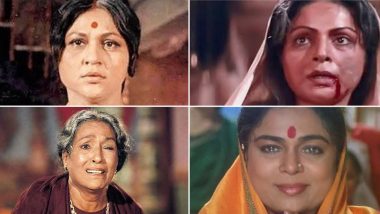 Salman Khan had once said, "I had refused Baazigar. When Abbas Mustan came to me with the script, I asked my dad for his inputs. He felt that since it’s a story of a negative character they should add an angle of the mother in it. They didn’t agree. When I said no to the film, they went to Shah Rukh and then they added the mother angle!" We all know how important Rakhee's role was in this movie which later made a star out of a nobody like Shah Rukh Khan. That's how important mothers were to the narrative of Bollywood. Often they are the trigger for heroes to do unprecedented stuff. Their loss is seen as an epic one. Remember the death of Jimmy's mother in Disco Dancer? It was heartbreaking! So on Mother's Day, it is only obvious to talk about the many mothers we have watched on-screen who defined what they should be. There were good mothers, evil ones, OTT mothers, strong mothers, meeks ones and much more. Mother’s Day 2020 During Coronavirus Lockdown: 4 Ways to Celebrate and Surprise Your Mom if You Are Staying Away From Home

Here're 11 on-screen mothers of Bollywood who gave you more reasons to love this most precious human in everyone's life - Maa!

A terrible incident caused by Bhagwan Dada gave her a damaged eye and completely changed the course of her career. From being a daredevil actress, she became an evil mother in so many movies. She was a brilliant performer and thus, she accepted even the hate for her devious portrayals. But even then she didn't limit herself. She was a matriarch with the heart of gold in Raj Kapoor's Anari and a warm but strict matron in Anand. She popularised the good-natured fun-loving Christian mothers we so love today.

What should we say about her? It's as if the Ma-a in Cinema was specially coined for her. Nirupa Roy's candid performances of a distressed mother of Amitabh Bachchan in many movies made her the mother of the nation.

The hopeful mother traumatised by the past, Nutan has been the epitome of mothers when she started taking up elderly characters. Karma and Meri Jung are still fresh in our memories.

Be it the disciplinarian in Khoobsurat or the funny one in Golmal, Dina Pathak as a mother was everyone's favourite. Those Hrishikesh Mukherjee feel-good movies would be incomplete without her.

'Mere Karan Arjun Ayenge' is not just a dialogue but an entire movie and a lot of emotion. Would they have returned if there wasn't this disheveled wronged bruised mother Rakhee waiting earnestly for it to happen? No they wouldn't have. It's called Ek Maa ka bishwas!

She is the mother we all would love to have. One who is a friend to her kids not a tyrant or a strict person just because she is a mother.

The loud over the top Punjabi mother is what Kirron Kher has depicted in so many movies. Those wouldn't have been that watchable if it hadn't been for her.

The rich sophisticated classy mother we all need to drive some etiquette into us. She isn't a favourite of many but you can't fault her for the way she is. You need some classiness in this messy world.

The mother who did the right thing even if it meant killing her son. The way she showed the agony and distraught of a mother who had to shoot her own son to right the wrong will always be Indian cinema's biggest sacrifice a mother could ever make.

Here's yet another mother who first proved to all that she wasn't born just to make Laddus in English Vinglish but also a vengeful mother who made sure that the man who tortured her daughter saw his rightful end in Mom.

Seema Pahwa in Bareilly Ki Barfi! is the mother we all are living with. The nagging ones whose life's mission to find a 'good boy/girl' for her kids even if it means to draw them up the wall. We all know how that feels. But we still love her because even in that, she is only thinking about us, selflessly!

(The above story first appeared on LatestLY on May 10, 2020 11:00 AM IST. For more news and updates on politics, world, sports, entertainment and lifestyle, log on to our website latestly.com).