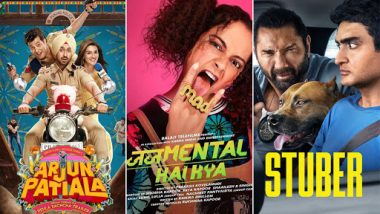 Box-office bids July a goodbye with three films hitting the theatres in India by the end of this month. We have two Bollywood films - Kriti Sanon, Diljith Dosanjh and Varun Sharma's comedy-drama Arjun Patiala and Kangana Ranaut and Rajkummar Rao's dark comedy Judgementall Hai Kya - hitting the silver screens on July 28. Talking about the solo Hollywood release, it is Kumail Nanjiani and Dave Bautista's comedy movie Stuber that hits the Indian screens on the same day. Which means it's all comedy to pick out for the movie buffs as July comes to an end with these entertaining releases. From Queen to Judgementall Hai Kya, Rajkummar Rao Reveals That His Rapport With Kangana Ranaut Hasn’t Changed

The hurdle for these new films remains last week's release The Lion King, that is already roaring at the box-office. It is expected that Jon Favreau's film will maintain its dominance in India, stealing the Indian audiences in numbers. Another worry for the new releases is Hrithik Roshan's Super 30, which is still doing good business. The Vikas Bahl film is made tax-free in Bihar, Rajasthan and Uttar Pradesh and might attract more audiences in the coming weeks. So, if you are planning to book tickets for any of these upcoming films, here's everything you need to know about the new releases Arjun Patiala, Judgemental Hai Kya and Stuber. Stuber: Dave Bautista and Kumail Nanjiani Discussed Toxic Masculinity Throughout the Film

From the makers of Stree and Hindi Medium, comes a situational comedy Arjun Patiala featuring Kriti Sanon as a journalist and Diljit Dosanjh as a local cop, who aspires to become an actor. Meanwhile, Fukrey fame Varun Sharma plays a pivotal role and we can expect his comic timing to come handy. Going by its trailer, the film, that also stars Manjot Singh, Mohammed Zeeshan Ayyub, Ronit Roy and Seema Pahwa, is expected to be a fun flick. Sunny Leone will be seen grooving to an item song.

Prakash Kovelamudi's Judgementall Hai Kya, brings back the Queen duo - Rajkummar Rao and Kangana Ranaut - back together after 5 years. Bankrolled by Ekta Kapoor, the film revolves around a murder investigation as Keshav (Rao) and Bobby (Ranaut) are the two major suspects. In the trailer, we see that the two individuals (Kangana and Rajkummar) try to convince the cops that they are innocent while the other suspect is the criminal, leaving us all wondering who the real killer is. Besides Rao and Ranaut, the film also features Jimmy Sheirgill, Amyra Dastur, Brijendra Kala and Satish Kaushik in supporting role. What might affect Kangana's movie is her Journalist controversy that erupted a fight with the media leading to the Entertainment Journalist Guild boycotting its promotional activity.

Dave Bautista and Kumail Nanjiani's Stuber seems to be a fun comedy ride. Helmed by Michael Dowse, the film revolves around a mild-mannered Uber driver who picks up a Los Angeles detective and the pair ending up on the trail of a brutal killer. Well, the journey unfolds some hilarious scenes holding this movie to be of great entertainment value. Speaking of the cast, Stuber also features Natalie Morales, Betty Gilpin as Becca, Jimmy Tatro, Mira Sorvino, Karen Gillan and Steve Howey insignificant roles.

(The above story first appeared on LatestLY on Jul 24, 2019 12:50 PM IST. For more news and updates on politics, world, sports, entertainment and lifestyle, log on to our website latestly.com).