Baahubali, Tiger Zinda Hai: These Were the Most Expensive Movies in India Before Akshay Kumar-Rajinikanth’s 2.0

The knowledge about the budget makes it even more interesting to watch and closely inspect the movie all over again. 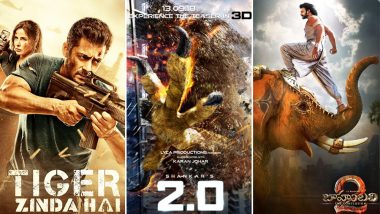 Movie making is a neither an easy nor a cheap venture. Unless, you are making a Sulagti Jawaani, of course. To make grand, entertaining and commercially viable movies of superior quality, a production house needs to invest money. Lots of it. One fine example of an expensive product is the upcoming Shankar directorial, 2.0. The movie is a spiritual sequel of Rajinikanth's Enthiran and adds Akshay Kumar as the villain to the mix. The teaser of the movie is due to come out on September 13, but it is already making headlines for being the most expensive movie to be ever made in India.

2.0 was scheduled to release in January this year but was delayed because the makers wanted to work more on the VFX. Yikes, that must have cost a lot. Well, before we get ready to see the most expensive movie that the Indian film industry has ever churned out, we have to talk about the previous title holders. 2.0 Teaser: All You Need to Know About Rajinikanth-Akshay Kumar's Sci-Fi Film.

So, in case you have not watched the following expensive movies, it is about time.

The budget of the Baahubali sequel starring Prabhas and Rana Daggubati was reportedly Rs 250 crore. We don't even need to tell you the numbers the movie earned to make you believe that it was a successful venture. Finally! Akshay Kumar and Rajinikanth's 2.0 Teaser Releases On September 13!

The Sanjay Leela Bhansali magnum opus is one of the most controversial movies that has come out in the longest time. With all the protests and bans going on against the film, Rs 215 crore budget was at stakes. Thankfully, it turned out to be profitable.

The action-packed Salman Khan and Katrina Kaif film is one of YRF's most expensive film. Rs 210 crore was the amount that needed to be recovered by the makers. They not only succeeded in that but also made a huge profit.

Tough to believe but this Salman Khan starrer is one of the most expensive movies made in India. Rs 180 crore was the reported budget of this movie. Well, credits where its due - the sets were quite grand. Quite a lot of money must have been spent building them. BTW the budget is the same as Baahubali: The Beginning.

This 1960 historical drama only had a budget of Rs 1.5 crore at the time. But after inflation, the numbers come up to Rs 96 crore.

So, that was our list of the most expensive movies ever made in India, that you should definitely watch. The knowledge about the budget makes it even more interesting to watch and closely inspect the movie all over again. You can reassess if the money was well spent.

(The above story first appeared on LatestLY on Sep 11, 2018 11:51 AM IST. For more news and updates on politics, world, sports, entertainment and lifestyle, log on to our website latestly.com).