Raj Sippy Birthday Special: Satte Pe Satta, Thanedaar, Saugandh - Five Popular Movies Of The Filmmaker And Where To Watch Them

Raj N Sippy celebrates his birthday today and it gives us a perfect chance to list out five movies of his that you can watch. Satte Pe Satta, Thaanedaar, Andar Bahar, Saugandhi are some of his popular titles. Do check out where you catch up on these movies. 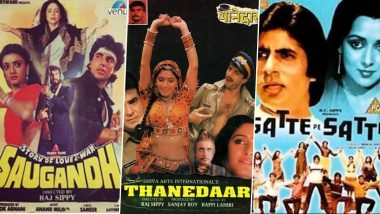 Raj N Sippy has been around in the industry for several decades now. He has been a prominent filmmaker in the 80s and is popularly known for working with Amitabh Bachchan in Satte Pe Satta. It is said that during the drunk scene between Bachchan and Amjad Khan in the film, Sippy left the camera rolling and let the actors improvise the scene. So it could be possible that all the 'Daaru peene se liver kharab ho jata hai' conversation in the scene is pure ad-lib. Kriti Sanon Finally Reveals if She’s a Part of ‘Satte pe Satta’ Remake – Here’s What She Has to Say

Sippy is also credited for kickstarting and putting faith in a newcomer like Akshay Kumar with Sugandh. On his birthday today, let us tell you five of his most popular movies and where to watch them.

A Bollywood spin to Seven Brides For Seven Brothers, Satte Pe Satta is an all-time classic. There's nothing that we don't like about the film. If it's the bonding between the seven brothers with Bachchan leading the pack that's hilarious, the chemistry between Bachchan and Hema Malini is top-notch.

In the 80s and the 90s, it was more fun to watch Anil Kapoor and Jackie Shroff bicker or bond than to see them, romance actresses. In this film, one is a cop the other is a criminal and their equation is fire and ice.

A contemporary spin on the Deewar plot, Thaanedar has two brothers choosing separate and contrasting routes after their cop father's death. The movie has some amazing music!

This film marked the return of Vinod Khanna to movies for a second innings which was highly successful. The story is about an honest yet ruthless cop who kept criminals in a bind. But a custodial death later, he is transferred to a remote area with graver issues.

Akshay Kumar's debut movie or rather his first release Saugandh had a typical 90s plot with romance, revenge, redemption and a lot of action. Akshay's introduction scene could well be the reason he became Khiladi Kumar.

(The above story first appeared on LatestLY on Mar 06, 2021 08:20 AM IST. For more news and updates on politics, world, sports, entertainment and lifestyle, log on to our website latestly.com).