Several reports also suggested that since '83 is based on the historic episode of the Indian cricket team winning the 1983 World Cup on June 25, the Kabir Khan directorial will be released on the same day 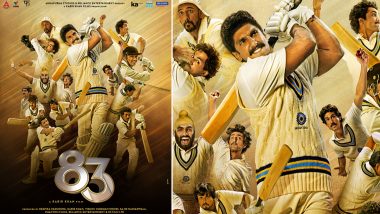 The theatres are now slowly opening for the viewers to come and enjoy their favourite films. Vijay starrer Master was amongst the biggest hits that released after the pandemic, making other filmmakers also consider a theatrical release for their films as well. Ranveer Singh starrer '83 is also one of the films that will be making it to the cinema halls really soon.  Earlier, reports discussed how Akshay Kumar, Katrina Kaif starrer Sooryavanshi will be hitting the theatres in April, now the latest reports suggest that '83 will be hitting the theatres soon after. Ranveer Singh's 83 To Release In Cinema Halls During Christmas 2020!

According to reports in Bollywood Hungama, '83 will be hitting the big screen in June 2021. A source revealed, "Reliance along with the many other producers of the film have decided to release the sports flick in the month of June. It makes sense as the normalcy would have kicked in firmly by then. Also, getting it in theatres before, in April, is not feasible as Sooryavanshi is releasing on April 2. Also, the holy month of Ramzan is expected to commence from Monday, April 12. So April is completely ruled out."

The source added that because the month of May will also see the release of two big films – Radhe - Your Most Wanted Bhai and Satyameva Jayate 2 the makers deemed fit that the Ranveer Singh starrer film releases post that. "Both the movies are expected to release during Eid, on or around May 14. A few films might also release in cinemas in the last two weeks of May. Hence, June seems like a good period," concluded the source.

Several reports also suggested that since '83 is based on the historic episode of the Indian cricket team winning the 1983 World Cup on June 25, the Kabir Khan directorial will be released on the same day to celebrate the victory once again. However, the source revealed, "There's no truth to it. The makers are looking at the whole month of June as of now. It might come on June 25 or it might come earlier." While no official announcement has been made, it is expected that the makers will reveal the details once Sooryavanshi's new release date is revealed. Akshay Kumar’s Sooryanvanshi and Ranveer Singh’s ’83 Might Release on OTT; Netizens Churn Funny Memes and Jokes.

'83 boasts of a strong star cast of Ranveer Singh, Pankaj Tripathi, Saqib Saleem, Tahir Raj Bhasin, Adinath Kothare, Harrdy Sandhu, Jiiva, Jatin Sarna, Chirag Patil, Sahil Khattar, Ammy Virk, Dhairya Karwa, Dinker Sharma among others. We will also Ranveer reunite with his wife after a long time. Deepika will be essaying the role of his on-screen wife in the film. The movie was earlier slated to release on April 10, 2020.

(The above story first appeared on LatestLY on Feb 08, 2021 03:02 PM IST. For more news and updates on politics, world, sports, entertainment and lifestyle, log on to our website latestly.com).