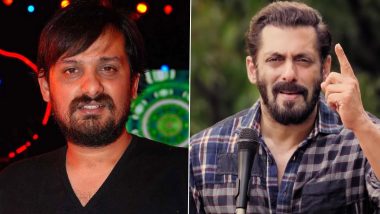 2020 is turning out to be the worst year for the entertainment industry. As after saying goodbye to Rishi Kapoor and Irrfan Khan, on Monday (June 1), Bollywood lost another gem. This time it's Wajid Khan of Sajid-Wajid fame who died at the age of 42. He breathed his last at a Mumbai's hospital. Reportedly, he had kidney-related ailments but passed away due to the deadly bug namely coronavirus. Wajid Khan was a brilliant music composer and mostly was Salman Khan's angel as he has composed many chartbuster melodies for the Dabangg star of Bollywood. Interestingly, the deceased had marked his Bollywood debut with Salman's film and also composed his last track for Sallu. Wajid Khan No More: Netizens Mourn The Loss of Bollywood's Renowned Music Composer (View Tweets).

For the unversed, it is Salman's Eid 2020 released 'Bhai Bhai' which was Wajid's last track. The song is all about keeping peace and harmony between communities in society. Not just this, even Bhaijaan's first-ever song 'Pyaar Korona' for his YouTube channel was composed by the duo, Sajid-Wajid. Must say, Wajid's music will be captured in the minds of his fans forever. Wajid Khan of Sajid-Wajid Passes Away at 42: 7 Chartbuster Songs Sung by the Composer That Will Remain in the Hearts of His Fans Forever.

'Bhai Bhai' was shot in Salman Khan's Panvel house where he is currently quarantining with his family. For the unversed, Sajid-Wajid and Salman's combo have always worked magic. Dabangg's franchise, Ek Tha Tiger, Wanted are a few movies in which they worked together. Wajid also crooned 'Mera Hi Jalwa' and 'Fevicol Se' for the superstar. May his soul rest in peace.

(The above story first appeared on LatestLY on Jun 01, 2020 10:48 AM IST. For more news and updates on politics, world, sports, entertainment and lifestyle, log on to our website latestly.com).