Wajid Khan of Sajid-Wajid Passes Away at 42: 7 Chartbuster Songs Sung by the Composer That Will Remain in the Hearts of His Fans Forever 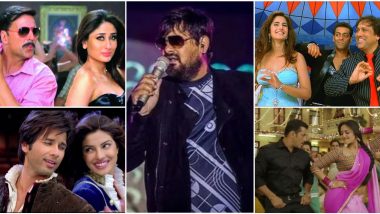 Wajid Khan Passes Away at 43: 7 Chartbuster Songs Sung By Him That Will Remain in Our Hearts Forever (Photo Credit: Twitter)

Wajid Khan (also known as Wajid Ali), one of the brothers in the composer Sajid-Wajid duo, passed away on May 31. He was just 42. The composer-singer was admitted in a hospital in Mumbai where he breathed his last. It was singer Sonu Nigam who confirmed the news to an entertainment portal. Wajid Khan Passes Away at 42! Sonu Nigam Confirms Sad News of Music Director of Sajid-Wajid Fame and Salman Khan’s Close Friend’s Demise.

Sajid-Wajid are sons of eminent tabla player, Ustad Sharafat Ali Khan. They were given their first break by superstar Salman Khan, in the 1998 film Pyaar Kiya To Darna Kya where they composed the track, "Teri Jawani", picturised on Arbaaz Khan and Anjala Zaveri. Composing the songs for Sonu Nigam's 1999 indi-pop album, Deewana, was their breakout success. Salman Khan again gave their first major soundtrack in Bollywood with Hello Brother.

Wajid Khan also carved a little career for himself as a singer, with some nice chartbusters in his kitty. As we mourn the loss of this dear composer, let's look at seven tracks that he sung to chartbusting glory.

This popular dance track is remembered for Salman Khan  and Govinda's dancing jugalbandi and the "Kehndi Po" catch-line. Wajid crooned the track along with Labh Janjua and Sneha Pant. He was also one of the singers for the film's title track.

Wanted was another big hit, both at the box office and in the musical charts. Wajid had sung the "Love Me Love Me" track along with Amrita Kak, that was picturised on Salman Khan and Ayesha Takia.

How can we forget the immensely popular title track from one of Bhai's most iconic hits? While this track has seen two variations over the sequels, we still have a special place in our hearts for the original track. Sukhwinder Singh is his co-singer.

Taking a small break from Salman Khan, here's another huge chartbuster that Wajid and Mika Singh had crooned for Akshay Kumar in the 2012 film Rowdy Rathore. The song also features cameos from Kareena Kapoor, director Prabhu Deva and in his sole Bollywood appearance, Thalapathy Vijay.

The lovely song from the 2012 film Ek Tha Tiger had some distinct Middle Eastern flavours, and had rocked the musical charts along with the rest of the songs in this album. Picturised on Salman Khan and Katrina Kaif, the track was crooned by Wajid and Shreya Ghoshal.

While Shahid Kapoor and Priyanka Chopra-starrer Teri Meri Kahaani was a flop at the box office, its songs, composed by Sajid-Wajid, were hits. "Mukhtasar" is a beautiful romantic track from the film, that Wajid had done a solo rendition.

For Dabangg 2, Wajid had crooned two tracks, one being the saucy but too "Munni Badnaam" wannabe, "Fevicol Se". Our favourite is the more mischievous "Pandey Jee Seeti", that was picturised on Salman, Malaika Arora and Sonakshi Sinha.

Dear Wajid Khan, we will definitely miss you. May your soul rest in peace!

(The above story first appeared on LatestLY on Jun 01, 2020 04:00 AM IST. For more news and updates on politics, world, sports, entertainment and lifestyle, log on to our website latestly.com).