The upcoming film Saina starring Parineeti Chopra in the lead is a biopic based on badminton player Saina Nehwal and the actress would be seen essaying titular role. 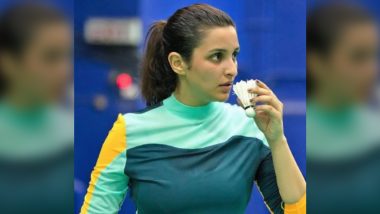 The upcoming film Saina starring Parineeti Chopra in the lead is a biopic based on badminton player Saina Nehwal and the actress would be seen essaying titular role. Directed by Amole Gupte, the biographical sports film was scheduled to be released in March 2020. However, the makers had to postpone the release date owing to the coronavirus pandemic. The buzz is now rife that the makers are considering to release the film on OTT platform and skip theatrical release. Saina Nehwal Biopic: Director Amol Gupte Reveals Parineeti Chopra Starrer Sports Drama Will Be Done Filming by Early February.

There have been several films that have been released on OTT platforms. Whilst many appreciated the decision taken by the makers, there were several film exhibitors who have opposed the decision taken by filmmakers and producers. Talking about the release of Saina on OTT platform, a trade source revealed to Mid-Day, “Saina was slated to hit theatres last summer, but the plans came to a halt because of the pandemic. Now, the makers have again begun discussions about its release. Considering theatres are functioning at 50% occupancy, they are considering an OTT release. A final call has yet to be taken.” EXCLUSIVE: Parineeti Chopra Spotted in Saina Nehwal Look as She Shoots for the Biopic in Navi Mumbai (View Pics).

Shubhrajyoti Barat, who essays the role of Harvir Singh Nehwal stated to the tabloid that the film is expected to release in the next few months and the decision to release it in theatres or OTT are left best to the producers. Saina is produced under the banner of T-Series. Let’s wait for an official update from the makers about the film’s release.

(The above story first appeared on LatestLY on Jan 26, 2021 10:41 AM IST. For more news and updates on politics, world, sports, entertainment and lifestyle, log on to our website latestly.com).