Sajid Nadiadwala celebrates his birthday today and so, we bring to you 10 blockbusters of his which make him one of the most successful producers of Hindi Cinema. 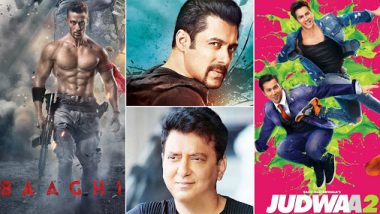 Sajid Nadiadwala is one of those filmmakers who started work on his dream very young and is thoroughly successful. He was J P Dutta's assistant director on Ghulami at the age of 21 and by the time he was 25, he had already incepted his own production company Nadiadwala Grandsons Entertainment Pvt Ltd. Since then there has been no looking back for this filmmaker. He has produced some of the biggest hits of the 90s and can be credited a lot for giving Salman Khan a majority of hits in that time. Sajid Nadiadwala Says Content is King But Stars Not Fading

But did you know Nadiadwala has completed his CA and Law education? But guess having grown up on movies with grandfather and father in the business, films were the obvious choice. Nadiadwala has been very lucky with his productions as they have mostly been either blockbusters, superhits or hits. On his birthday today, let us tell you how successful he is as a producer!

All the movies before Jeet were hit too like Waqt Humara Hai and Andolan but Jeet was his first super hit film. Starring Sunny Deol, Salman Khan and Karisma Kapoor, it was the second highest-grossing movie of that year. A Rs 6 crore film had earned Rs 55 crore which was a huge deal back then. That was the thing about Sajid, he could bring two huge superstars together in one movie and never bat an eyelid!

Salman and Sajid have always been friends and after Jeet, they have become a hit box office pair as well. Judwaa was that year's ninth-highest grosser and perhaps Salman's biggest hit ever till then.

Yet again he brought together two big stars like Akshay Kumar and Salman Khan in a film and gave the audience what they love to watch. The film was the third highest-grossing movie of that year.

So it all began here! Sajid Nadiadwala had written this comic caper as well which is also the best one in the whole franchise, according to us. The film did a roaring business and was the fourth highest-grossing film of that year.

The second film in the franchise went even better with some more fun gags to laugh on. The film was the fifth highest-grossing movie of that year and finds a place in the all-time Indian movie hits list.

Sajid turned director for the first time for his best friend Salman Khan and got a Rs 200 crore earning film in return.

Judwaa again does the trick for Sajid and this time it was with a double dose of Varun Dhawan with twice the fun of Salman Khan thrown in. It was the biggest silver lining for 2017 when Bollywood saw a really bad period at the box office.

Sajid Nadiadwala has turned completely towards honing the young guns of the industry and Tiger Shroff is included. Baaghi 2 was a raging hit that gave Tiger his first Rs 100 crore film.

A departure from a typical Sajid Nadiadwala produced movie, this was a feel-good film about college students and their hostel life. People loved it so much that this small film became a blockbuster. It earned a whopping Rs 150 crore and more without any huge superstar in the lead.

We know there are a lot of people who believe Housefull 4's numbers are not real but the producers have officially revealed that it has cruised past Rs 200 crore. That makes it a win for Sajid Nadiadwala.

Interestingly, in his career since the 90s, Sajid Nadiadwala has delivered only three big flops - Jaane-E-Maan, Tamasha, and Phantom.

(The above story first appeared on LatestLY on Feb 18, 2020 09:00 AM IST. For more news and updates on politics, world, sports, entertainment and lifestyle, log on to our website latestly.com).