Helmed by Revathy, the film focuses on a mother who fights through every challenge her ailing son faces and helps him live life to the fullest. 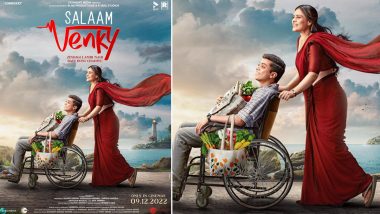 Bollywood actress Kajol, who is awaiting the release of her upcoming movie 'Salaam Venky', has opined that Vishal Jethwa, who stars as her son in the film, has done complete justice to his part in the film, and nobody else could have played the role better than him. Helmed by Revathy, the film focuses on a mother who fights through every challenge her ailing son faces and helps him live life to the fullest. Salaam Venky: Revathy Film Reunites Kajol With Kamal Sadanah, Her Debut Movie Hero, After 30 Years (Watch Video).

Praising Vishal for his work, the actress said: "I can't imagine anyone else playing Venky other than Vishal. Simply because he has lived with him every moment on the sets and all of us felt that." Apart from Kajol and Vishal Jethwa, the film also stars Rahul Bose, Rajeev Khandelwal, Prakash Raj and Ahana Kumra in pivotal roles. Bigg Boss 16: Kajol and Salaam Venky Director Revathi Join Salman Khan For Weekend Ka Vaar.

Presented by Connekkt Media and produced by Suuraj Sinngh, Shraddha Agrawal, and Varsha Kukreja under the banner BLIVE Productions and RTAKE Studios, 'Salaam Venky' is directed is landing in theatres on December 9.

(The above story first appeared on LatestLY on Nov 26, 2022 09:07 PM IST. For more news and updates on politics, world, sports, entertainment and lifestyle, log on to our website latestly.com).