Satyameva Jayate 2: John Abraham's Next to Have an Eid Release on May 12, 2021, Actor Shares his Bare-Bodied, Mustached Look in the New Poster

Satyameva Jayate 2 also stars Divya Khosla Kumar in the lead and will revolve around the fight against injustice and misuse of power. 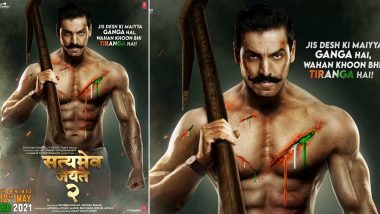 Satyameva Jayate 2's shooting was halted amid the coronavirus pandemic but the makers are trying to resume it at the earliest. The film also stars Divya Khosla Kumar in the lead and will revolve around the fight against injustice and misuse of power. Speaking on the upcoming film, Bhushan in his earlier interaction had said, “Emmay and T-Series have become a family and our association together have always been fruitful. Satyameva Jayate was a blockbuster and making the second one with Milap and John was a no guess game. And all the best to Divya who has joined the team with this one.” Satyameva Jayate 2 Director Milap Zaveri Drops Hint About the Storyline of John Abraham Starrer.

Check Out the New Poster

With John having an Eid release, there are high chances that he'd lock horns with Salman Khan at the box office. Considering the actor has registered the holiday under his name since the past few years, it's no brainer that he'll have a project ready for 2021. Salman's Radhe was earlier scheduled to release on Eid 2020 but got delayed amid the pandemic. While the actor is yet to announce a new release date for it, we wonder if he'll decide and release it on the same festival weekend next year.

If and when it happens, it would be an interesting update and we'll keep you posted about it.

(The above story first appeared on LatestLY on Sep 21, 2020 08:29 AM IST. For more news and updates on politics, world, sports, entertainment and lifestyle, log on to our website latestly.com).